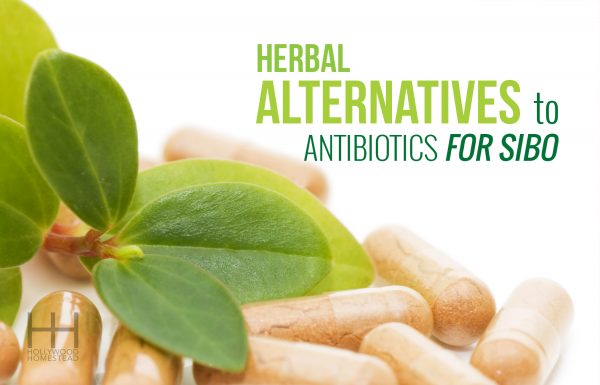 There is no denying that antibiotics are one of the most beneficial medical innovations of modern history. They have helped eradicate many communicable diseases and saved countless lives. But antibiotics have also brought with them a number of unforeseen problems and health risks. Before we go any further, I want to say that I’m not anti-doctor nor against traditional medicine, but each has its time and a place.  Antibiotics are overprescribed and shouldn’t be our default choice for treating everything. For numerous reasons, many people are turning to herbal alternatives to antibiotics for treating SIBO.   This article is part of a series about treating SIBO. If you missed the last parts of the series, catch up here:

What is an Antibiotic?

According to MedicineNet.com, an antibiotic is:

A drug used to treat bacterial infections. Originally, an antibiotic was a substance produced by one microorganism that selectively inhibits the growth of another. Synthetic antibiotics, usually chemically related to natural antibiotics, have since been produced that accomplish comparable tasks.

As humans, we have been using natural antibiotics for centuries, even before we knew what bacteria was. For example, garlic has been used since at least 2600BC for its healing properties.   Today, we now know that garlic has natural antibacterial properties.

Why Choose Herbal Alternatives to Antibiotics for Treating SIBO?

There are already several pharmaceutical antibiotics which are commonly prescribed for SIBO (such as Rifaximin). So why would you choose herbal antibiotic alternatives over these? There are three main reasons:

In 1929, Alexander Fleming discovered penicillin and changed modern medicine completely.   Doctors were convinced that antibiotics would cure all bacterial diseases. In 1963, the Australian physician and Nobel Prize winner Sir Macfarlane Burnet even said that by the end of the 20th century humanity would see the “virtual elimination of infectious disease as a significant factor in societal life.” In 1970, the Surgeon General William Stewart said that antibiotics would soon “close the book on infectious diseases.”

They couldn’t have been more wrong!

What they didn’t realize was that bacteria are capable of adapting to antibiotics and becoming resistant to them. This is a VERY serious problem, and one which shouldn’t be taken lightly.  Thanks to antibiotic resistance, diseases which were once treatable — such as tuberculosis — are often now fatal.  We may soon see the reemergence of diseases like typhoid, diphtheria, and many others.1

Herbal alternatives to antibiotics work on multiple levels in the body, so resistance is less likely to occur.  Further, by using herbal remedies instead of turning to pharmaceuticals every time you get sick, you slow the spread of antibiotic resistance.3, 4

2) Fewer Side effects with Herbal Antibiotic Alternatives for SIBO 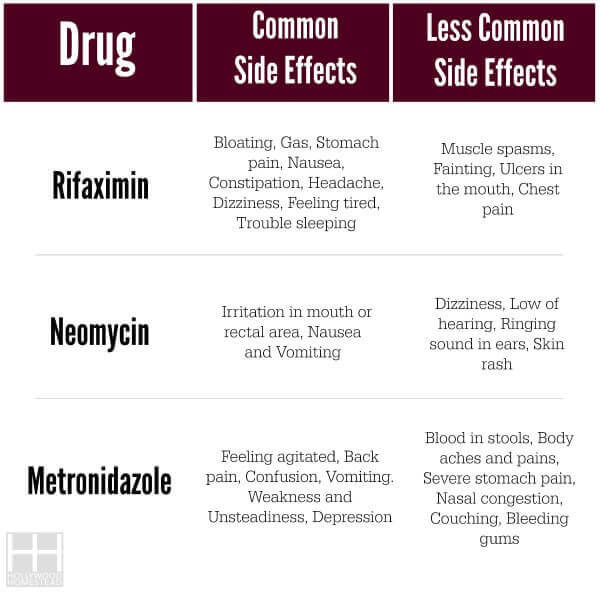 3) Herbal Alternatives to Antibiotics Can Be Very Effective

Need another reason to choose herbal remedies over antibiotics for SIBO? How about the fact that herbs may be more effective in treating SIBO than prescription antibiotics! Now, bear in mind that there have been really few studies on pharmaceutical antibiotics for SIBO. There have been even fewer for herbal treatments for SIBO.  In fact, there are only two (yes, TWO!) studies to date which look at how herbal alternatives can treat SIBO. And one of these studies was on just one person!5

However, the lack of research doesn’t mean that herbal alternatives to antibiotics aren’t a good solution. In the larger study, which was published in the journal Global Advances in Health and Medicine6,  the results are pretty impressive. They took 104 people who had been diagnosed with SIBO through lactulose breath testing. Of these, 37 of the patients were treated with herbal alternatives to antibiotics and the remaining were given Rifaximin.

46% of the patients who took herbal alternatives to antibiotics had a negative breath test upon follow-up, compared to just 34% of the Rifaximin users. The researchers concluded that herbal therapies are “at least as effective as Rifaximin for resolution of SIBO.”

Doctor Siebecker, who is a leading expert on treating SIBO, says that she and her associates have regularly used herbal treatments for SIBO since 2011 and “have consistently found them to be as effective as pharmaceutical antibiotics in relieving symptoms and reducing gas levels on breath testing.”5

What Makes Herbal Alternatives to Antibiotics So Effective?

Why would a natural substance be more effective than the prescription drugs which scientists worked for years to develop? The book Herbal Antibiotics by Stephan Harrod Buhner describes it well. He talks about how pharmaceutical antibiotics are isolated chemicals – meaning they are one chemical. Because they are only one thing, it is easier for bacteria to adapt to them and develop a resistance. By contrast, herbs are made up of many compounds. For example, garlic (which is one of the best known natural antibiotics) contains dozens of compounds.

All of these compounds work together and can attack bacteria on multiple levels. It is much harder for bacteria to adapt to herbal treatments because of how complex the herbs’ structures are.7 Even the individual compounds in herbs can work in complex ways. Allicin, which is one of the main antibacterial compounds found in garlic, is a particularly good example of the complexity of herbal treatments.

Interestingly, allicin isn’t present in undamaged garlic. But, when the garlic becomes damaged, a chemical reaction occurs and allicin is produced to protect the plant from disease and other damage (that is why garlic becomes pungent once you cut it open). Once in the body, allicin undergoes a redox-reaction with proteins, which is thought to be the source of its biological activity.8 *Allimed does not contain the FODMAPs part of garlic (learn about FODMAPs here), so it is okay to take for SIBO.

Here is some food for thought.  Animals can move, and this allows them to come up with evolutionary survival mechanisms like being able to run fast or have sharp claws to fight predators. Plants don’t have the ability to move, so they’ve had to come up with other ways of protecting themselves. They’ve evolved chemical structures to protect themselves – like how poison ivy will make you itch or kale tastes bitter so animals won’t want to eat it. These mechanisms have been perfected in millions of years of evolution (definitely longer than we’ve been creating chemicals in labs!).

With a bit of research, we could utilize these natural plant compounds for our own benefit. Consider the fact that about 40% of all prescription medicines are plant-derived. About 25% of these come from the rainforest, and we’ve only tested fewer than 1% of all the tropical trees and plants in the rainforest! 10

The bottom line? Plants are pretty amazing and their healing powers shouldn’t be underestimated.

Unfortunately, there hasn’t been much research into herbal alternatives to antibiotics, and even less research about herbal treatments specifically for SIBO (it seems that drug companies would rather fund research for expensive chemical pharmaceuticals than cheap, natural remedies!).

Disclaimer: Remember, none of these herbal treatments have been approved by the FDA for SIBO. While there is some evidence that these substances may have medicinal benefits against infections, it does not necessarily mean that they will work for you.  Always talk to your doctor before taking any supplements for treating SIBO.

Here is the herbal regimen I used for treating SIBO:

I took all 3 of these herbal antibiotic alternatives for a 14 day course.  Many people take herbal remedies for SIBO even longer though — such as 1 month courses!  I took these herbal treatments while I was doing the elemental diet (which I wrote about here).  You don’t have to do elemental though.  In fact, many people do either/or.

***While I totally understand why someone would choose herbal remedies over prescription antibiotics, it is important to note that herbal treatment courses are often much longer.  It is like using a handgun instead of a grenade. 😉    And, again, I emphasize that these are supplements and are not approved drugs by the FDA.  Your doctor might not recommend them for that reason.

Whether you are taking herbal remedy or pharmaceutical antibiotics for SIBO, you should wait 14 days after finishing a round before retesting.  This is critical for the accuracy of test!  However, don’t wait more than 16 days to retest; you want to retest before regrowth of bacteria (recurrence) has time to occur. After finishing with herbal or pharmaceutical antibiotics, you will want to take a prokinetic agent (I took MotilPro during the herbal antibiotic alternatives course and added 2 more prokinetics post-treatment).  You can start with the prokinetic immediately after antibiotics, even before you’ve retested.

Remember, herbal alternatives may be a better than pharmaceutical antibiotics – but even these aren’t the sole solution to treating SIBO.  To get rid of SIBO and keep it away, you’ve got to treat the underlying issues which caused the bacterial overgrowth in the first place. That means making changes to your diet and life. We will talk about these changes in the upcoming articles in this series. 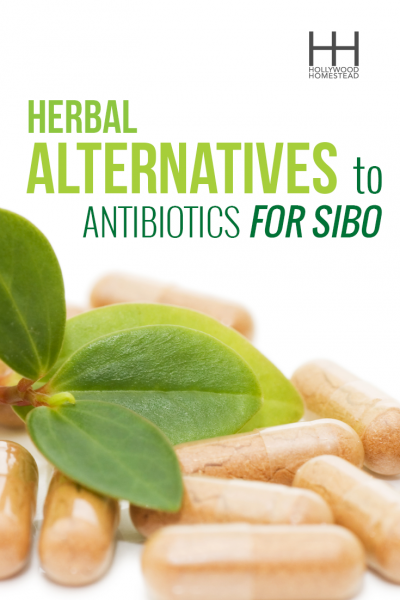 262 thoughts on “Herbal Alternatives to Antibiotics for SIBO”