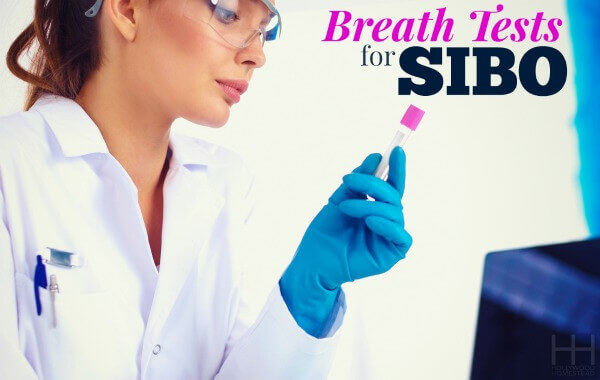 There are many ways to diagnose SIBO (which we talked about in the last part of this series).  However, there are a lot of limitations with many of these diagnosis methods.  The best way to diagnose SIBO is with breath tests. These tests measure the amounts of certain gases in your gut.  If the levels are high, then it indicates that bacteria levels are too high.

This is part of a series on Treating SIBO.  If you missed the last parts of the series, check them out here:

What Are Breath Tests Used For?

The bacteria in our guts feed off of carbohydrates. They produce gases as a byproduct. Some of the gases are then absorbed through the lining of the colon and get into our blood. From there, the gases make it to our lungs and are exhaled in our breath.

Breath tests aren’t just used to diagnose SIBO.  They can also be used to diagnose H. pylori, lactose intolerance, and fructose intolerance.  However, it is important to note that the breath tests are slightly different for each of these conditions.  For example, the bacteria H. pylori produces carbon dioxide, so this is the gas that labs will be looking for in the breath test samples.1 (Read about how to treat H. pylori naturally here)

To diagnose SIBO with breath tests, labs need to look for elevated levels of hydrogen and/or methane.  Note that there is a difference between Hydrogen SIBO and Methane SIBO, which we will address later in the series.

How SIBO Breath Tests Are Performed

You can order SIBO breath tests to take at home, or you can perform them at the lab. You will be required to fast for at least 12 hours before the test is taken. That means no food, but prescription meds and water are okay. You will also have to follow a special diet for 1-2 days before the test. The diet basically removes any fermentable foods so you don’t have gas in your GI tract prior to the test and get a false positive.

To take the test, you first breath into a little tube (pictured below) to measure your base hydrogen and methane levels. Then you drink a special solution of lactulose or glucose. You breathe into the tubes again every 20 minutes.   To do it, you just breathe into them through a cocktail straw for a few seconds.  You will see the condensation form.  Then put the lid on and restart your timer.  The test measures how the levels of hydrogen and methane change.   A positive SIBO breath test is defined as one where there are peaks of hydrogen and/or methane after taking the sugar solution.2

You Must Test for Both Hydrogen and Methane

If your doctor tells you to get a test for just hydrogen, you should insist on testing for methane (and also consider switching specialists!).   The bacteria in your gut feed off of carbohydrates and produce hydrogen as a byproduct. However, 8-27% of people do not have detectable levels of hydrogen production in their guts from bacteria. Instead, they produce methane.   This is because our guts also contain archaea, which are similar to bacteria but in a different kingdom of organisms. Archaea feed off of hydrogen and produce methane gas as a byproduct. So, a bacterial overgrowth could cause increases in hydrogen, methane, or both. We will get into this more in the next section of the series about the difference between Hydrogen and Methane SIBO.

Further, certain types of bacteria in the gut produce methane instead of hydrogen. Some of these include: Staphylococcus aureus,Streptococcus viridans, Enterococci, Serratia and Pseudomonas species. If you were to test just for hydrogen, you could miss overgrowths of these bacteria and get a false negative.3

Here is what my breath test looked like. You can see that methane levels are elevated – which is why it is so important to test for both hydrogen and methane:

Both lactulose and glucose are types of sugars. Not sugar as in the white stuff you buy in supermarkets, but sugar as in the substance that our bodies break carbohydrates down into.  Bacteria digest the sugars and produce gas as a byproduct, which can be measured in a breath test.

There are also other breath tests available, such as one using the sugar xylose, but these aren’t as reliable and may give a false negative.

Lactulose Tests: Humans don’t absorb or digest lactulose — only bacteria in our bodies will do that and will produce gas as a result.  The test isn’t as accurate as glucose tests, but they can detect SIBO in the end of the small intestine, which is where it is considered more common.

The 3-Hour Lactulose breath test is considered the Gold Standard for diagnosing SIBO. Unfortunately, most laboratories only offer shorter tests.  These shorter tests aren’t as reliable because it takes time for hydrogen and methane to travel through the gastrointestinal tract, into the blood, and out the lungs into our breath.4

The bottom line? Choose a lab test with a longer time.

Next up in the series: The difference between hydrogen and methane SIBO 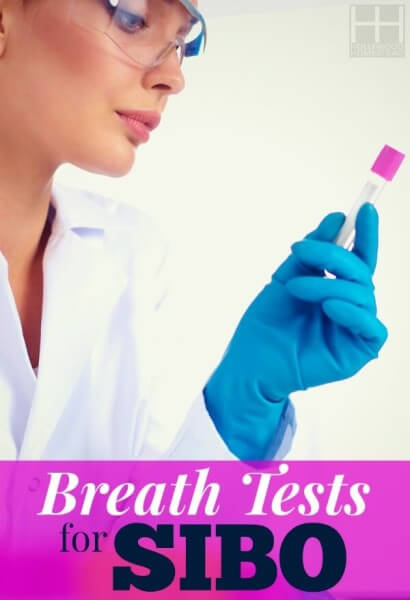