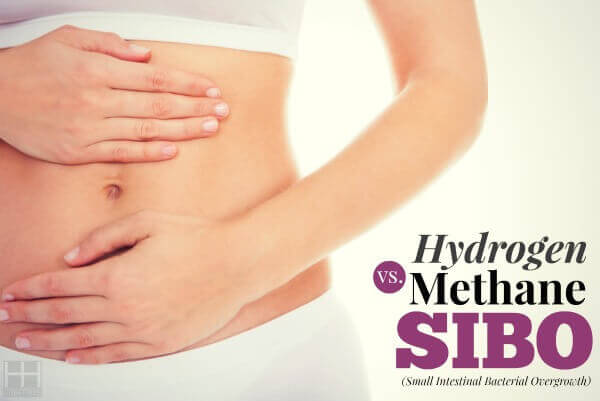 SIBO – or Small Intestinal Bacterial Overgrowth – is a serious condition in which there is too much bacteria and/or the wrong type of bacteria in the small intestine.   There are two types of SIBO: hydrogen SIBO and methane SIBO.

This is part of a series about treating SIBO.  If you missed the last parts of the series, you can catch up here:

Key Points about the Two Types of SIBO

*Note I say “may have SIBO” because high breath test levels can indicate other problems as well, not just SIBO.

What’s the Difference between Hydrogen and Methane SIBO?

In a healthy gut, food is broken down and absorbed into the blood through the small intestinal wall. With SIBO, there is too much bacteria in your small intestines, and/or the wrong type of bacteria. Bacteria causes unabsorbed carbohydrates in food to ferment before they can be broken down. The process of fermentation creates hydrogen gas as a byproduct.  So, if you have too much bacteria in your small intestines, then you will have high levels of hydrogen – hence the hydrogen breath test for SIBO.

But things aren’t that simple. Stay with me… Your small intestines can also contain archaea. Archaea feed off of hydrogen. They produce methane as a byproduct. This helps reduce the levels of hydrogen in the body. This is why you can have a negative hydrogen test and still have SIBO.1

Archaea are single celled organisms which lack a nucleus. They are actually pretty cool in that they’ve been found in virtually all places where anaerobic degradation of organic compounds occurs. They’ve even been found in the extreme heat of ocean floor vents! Up until recently, archaea were considered a bacteria. However, they are a completely different kingdom than bacteria.2

When you eat fiber, the bacteria in your gut start to ferment it. The fermentation produces hydrogen. What do archaea feed off of? Hydrogen! When the archaea consume the hydrogen, they produce methane as a byproduct.   In this sense, archaea help reduce the amount of hydrogen gas in our colon – but the methane can have its own negative effects.

A compound which creates methane in the body is called a methanogen. The process of forming methane is called methanogenesis.   Some animals rely on methogen-forming archaea. One example is cows which produce a huge amount of methane because of all the bacteria in their stomach which ferment grass. The archaea love the hydrogen from all the fermentation going on. They proliferate and produce methane, which comes out as flatulence.  Methane is actually very flammable — don’t get any ideas 🙂

This is a very simplified description of methane production in our bodies, and there are many more pathways involved with methane metabolism. However, for the sake of understanding SIBO, this should be enough.

Interestingly, we don’t start producing methane until we are about 3 years old. And not everyone produces methane. Depending on which study you go by, about 33% to 72% of adults produce methane.3

For a long time, people thought that methane was a completely harmless substance in the body – other than causing flatulence and a bit of bloating. However, research is starting to show that high levels of methane may be linked to certain health issues. The main problem caused by methane is constipation (though constipation can be caused by numerous other things). Because methanogens cause a higher production and absorption of short-chain fatty acids, they are also linked to obesity.

Hear that? Methane is linked to obesity. In one study, mice were given a methane-producing archaea and it caused an increase in body fat. In human studies, it was shown that subjects with higher methane levels in their breath tests had higher BMIs.5

When it comes to methane and digestive disorders like SIBO, there still isn’t much research. However, evidence shows a strong link between methane-producing archaea and SIBO.

As Chris Kresser points out, methane-producing archaea is present in 45% of people with SIBO. Not only that, but the amount of methane produced by people with SIBO is higher.6

Is it the archaea themselves which are the cause of the problem? Or are the archaea thriving because they have so much hydrogen to consume because of a bacterial overgrowth? We still need further research to answer these questions, but the answer is probably that both too much bacteria and archaea cause problems. That is why experts like Chris Kresser recommend taking steps to eliminate both bacteria and archaea from the small intestine for treating SIBO.

How This Affects Treatment of SIBO

As a patient, you probably don’t need to know about all the scientific differences between archaea and bacteria and how they produce hydrogen and methane.  However, it is good to know why your doctor is testing for hydrogen and methane (if your doctor orders only a hydrogen test, insist on getting a methane test too! If the archaea is eating up all the hydrogen, you will have a false negative with the hydrogen test!!!).  It is also important to understand that each type of SIBO can have different symptoms.

Here is a picture of my first SIBO breath test.  You can see that methane levels are high, not hydrogen — which is why it is so important to test for both hydrogen and methane!

Methane is strongly linked to constipation. So, the following is usually true of the symptoms of SIBO:

Because of these symptoms, you will often hear the terms SIBO-C (for constipation) and SIBO-D (for diarrhea).

This chart shows the prevalence of constipation and diarrhea in patients with high levels of hydrogen, methane, and both. H2 = hydrogen. CH4 = Methane. 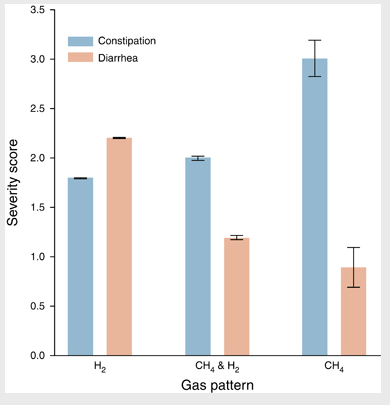 You also need to know that the treatment for SIBO is different depending on whether it is methane or hydrogen producing. Most of the archaea which produce methane are somewhat resistant to the antibiotics used to treat SIBO. So, if your problems are caused by archaea overgrowth, then taking those antibiotics aren’t likely going to cure your SIBO, even if you take multiple rounds.  Because of this, methane SIBO is definitely the most difficult to treat because of archaea’s resistance to antibiotics.

Actually, antibiotics alone aren’t likely to cure SIBO.  Sure, if you take enough rounds of them, you will kill off the bacteria.  But antibiotics don’t fix the root problem which allowed bacteria to proliferate in the first place, so the SIBO is just likely to come back (hence the high recurrence rate for SIBO). We talked about this in part 3 about the causes of SIBO.  In the next parts of the series,we will get into the comprehensive steps you need to get rid of SIBO for good, including antibiotics, diet, and lifestyle changes. 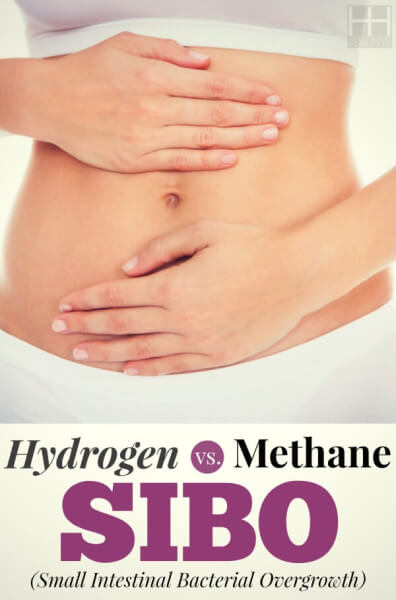