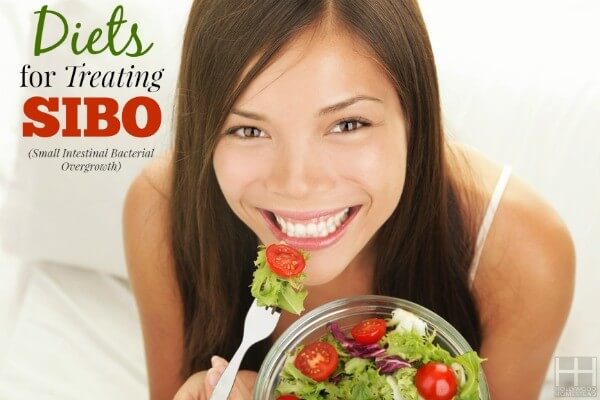 If you have Small Intestine Bacterial Overgrowth (SIBO), chances are that antibiotics alone aren’t going to fix it.   To make sure that SIBO goes away and stays away, you’ve got to address the underlying problems which caused it in the first place. This often means making serious changes to your diet, even if you are already eating healthy.

There are 5 main dietary approaches to treating SIBO. The diets vary significantly, but are all based on one common principle: starve the bacteria and/or don’t re-feed it.

In this article, we’ll go over the SIBO diets, discuss which is the best diet for SIBO, and how to incorporate diet into your SIBO treatment.

This is part of a series about treating SIBO. If you missed the last parts of the series, catch up here:

Why Is Diet Important for Treating SIBO?

Bacteria is part of the natural structure of our guts, and it actually serves many important roles in our bodies which range from aiding in digestion to regulating mood. Just like all other living organisms, bacteria have to eat something. And what do bacteria primarily eat? Carbohydrates.

When you eat a diet which is full of carbs (especially simple carbs like the sugary and starchy foods found in the typical Standard American Diet), bacteria will have a field day. They eat up those excess carbs, proliferate, and then you’ve got an overgrowth problem on your hand.

It certainly doesn’t help that the SAD diet also is full of inflammatory foods like gluten which can damage the lining of the stomach and decrease stomach acid production (stomach acid helps kill and regulate bacteria).

As we talked about in the Causes of SIBO section, low stomach acid means you will have undigested particles of food in your small intestine, which the bacteria can then eat.

FODMAP stands for Fermentable Oligosaccharides, Disaccharides, Monosaccharides, and Polyols, which are the four classes of fermentable sugars/sugar alcohols. The Low FODMAP diet was originally derived as a dietary treatment for IBS but can be adapted for treating SIBO.

The idea behind the Low FODMAPs diet is that you get rid of foods which contribute to intestinal fermentation. FOMDMAPs diet is very effective in treating gastrointestinal conditions like IBD and IBS.

However, it is important to note that the Low FODMAPs diet does not restrict polysaccharide and disaccharide sources of carbs such as grains, starch, starchy vegetables, and sucrose.

These carbs are normally well-absorbed, but with SIBO they aren’t absorbed well and bacteria can feed off of them and worsen the problem. So, to treat SIBO, these carbs must also be removed.3, 4

Note: It’s LOW FODMAP, not NO FODMAP, so try not to drive yourself too insane 😉

SCD stands for Specific Carbohydrate Diet. It was originally developed by a pediatrician for treating Celiac disease and was later popularized by Elaine Gottschall in her book Breaking the Vicious Cycle. SCD limits complex carbs (disaccharides and polysaccharides), lactose, sucrose and other man-made (read: crappy) ingredients.

These ingredients are harmful to the digestive system and lead to yeast overgrowth, bacteria overgrowth, and inflammation. According to data from surveys, SCD has a 75% to 84% success rate.

Here are some examples of SCD foods:

GAPS stands for Gut and Psychology Syndrome. The diet was created by Dr. Natasha Campbell-McBride. It is based on the idea that all disease starts in the gut – which is supported by the fact that 90% of all cells and genetic material in the human body belongs to gut flora.

Campbell-McBride says that modern life damages the gut flora and leads to diseases including autism, ADD, epilepsy, depression, as well as many other diseases.

GAPS diet is similar to SCD diet, but allows/excludes a few different items and also has a very clear outline. There are seven phases to the GAPS diet. The introductory stage is basically a fast which allows very little food, room temperature water, and probiotics.

As you move through the phases, you are allowed to add more foods to the diet – such as egg yolks, avocado, and squash. There are some foods which are not allowed at any phase of the diet. GAPS diet also heavily focuses on detoxing.6

Not Allowed During Any Phase:

There isn’t any scientific evidence supporting GAPS diet for SIBO. Because the diet removes starches and certain sugars, as well as difficult-to-digest foods like beans, it can help reduce inflammation and intestinal fermentation. However, the diet does not remove high FODMAPs foods.

These foods act much like sugars and starches, meaning that you could still be feeding the bacteria in the gut.  For this reason, even GAPS diet will have to be adapted if it is going to be used to effectively treat SIBO.7

I’m hesitant about even including Elemental under the “diet” category, because it is really a short-term protocol for treating SIBO and not something you can live off of long term (at least not without completely losing your marbles).

Like with the other SIBO diets, the goal is to starve the bacteria — but in a really hardcore way.  You don’t eat anything!

To prevent the body from starving, you take a very specific liquid which contains the basic nutrients your body needs. It’s basically a tube feeding formula that you drink and has the nutrients to keep you alive.  The nutrients are in a predigested form so they can be easily absorbed into the bloodstream, allowing the gut to heal while the bacteria die off.  Elemental diet is most often used for treating Crohn’s disease, but some studies have shown that a short-term elemental diet can be very effective for treating SIBO.

I did an Elemental Diet while also taking herbal antibiotics for SIBO.  The experience was not at all pleasant but, in my case, it definitely helped kill off the bacteria so I think it was worth it.  I talked about it in this post.

The other diets mentioned above are used for treating SIBO. By contrast, the Cedar-Sinai Diet is designed to prevent SIBO.  It was devised Dr. Mark Pimentel, Director of the Gastrointestinal Motility Program at Cedars-Sinai Medical Center.

The diet isn’t as strict as the ones listed above, but follows the same general principles: you’ve got to reduce foods which are hard to your body to digest so bacteria don’t end up using them as food.  Pimentel’s diet also advises against frequent eating because this can affect the migrating motor complex which helps empty and clean the bowels.8  He outlines the details in his book A New IBS Solution.

Key Points of the Cedars-Sinai Diet:

The protocol also involves taking a prokinetic drug to improve motility and supplementing with  Hydrochloric Acid, if deficient.

Which Diet is Best for SIBO?

A combination of the Low FODMAPs diet and SCD Diet is considered best for treating SIBO.   Dr. Siebecker refers to this combo as the “SIBO Specific Diet”.  However, I like to restrict it a bit further since it allows for ingredients that aren’t ideal for anyone who wants to heal their gut — such as legumes and artificial sweeteners aspartame and saccharine.

What I would consider the best diet for SIBO is a combination of:

The Low FODMAP and SCD diets take care of the fermentable and pro-inflammatory foods which will feed bacteria.  The Paleo/Primal diet will take care of all those unnatural foods which wreak havoc on your gut health (not to mention the rest of your health).

In my eBook The SIBO Solution, I get into more detail about how to eat if you want to beat SIBO, plus have lots of great SIBO diet recipes.  Stay tuned and make sure you’re on my newsletter if you want to be the first to know when the ebook releases. 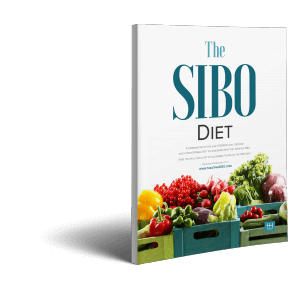