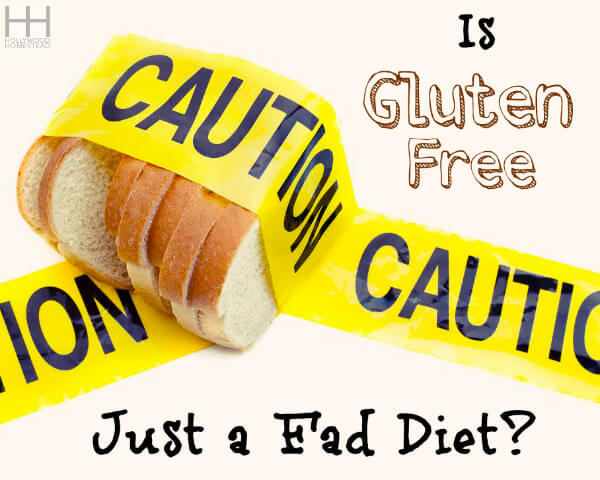 Recently there has been a swarm of people denouncing the gluten free diet as a fad.  The magazine Salon took a stab at actress Jennifer Esposito for needing to work a shorter schedule because of her celiac disease (maybe Esposito was exaggerating, but they turned it into an excuse to criticize gluten free diets).  Celiac sufferer Elissa Strauss spoke out against gluten free diets at Jezebel, saying that all of those fad dieters were making her disease seem less serious.  Even Mark Sisson, who is against all grains, says that the gluten free diet is a fad. His viewpoint even got coverage on Huffington Post.

According to a recent market research report, nearly 1/3 of Americans are trying to cut down on or avoid gluten. So, it is no surprise that there are people denouncing gluten free as a fad.  As Mark Sisson said, “whenever anything gets popular, people immediately begin hating it”.

Let’s face it.  The gluten free diet is a fad.  But just because gluten free is a fad, doesn’t mean there is nothing to it!

Let’s start with the basics.  Gluten is the protein in wheat which makes it sticky and gives bread its chewy texture.  It is composed of two different proteins: gliadin and glutenin.  It is the gliadin which most notoriously causes health problems though other components of wheat can also be culprits.

The main gluten-containing grains include:

The Difference between Celiac Disease and Gluten Sensitivity

Like with celiac disease, people with gluten sensitivity (also called non-celiac gluten sensitivity) have adverse reactions to gluten.  They also suffer a lot of the same symptoms, like bloating, fatigue, and digestive problems.  But, the adverse reactions of those with non-celiac gluten sensitivity is not limited to the gut.  As Chris Kresser points out, “Gluten intolerance can affect nearly every tissue in the body, including the brain, skin, endocrine system, stomach, liver, blood vessels, smooth muscles and even the nucleus of cells.” (source)

To test for celiac disease, doctors will generally first do a blood test to see if antibodies are present.  If they are, then they will need to confirm the diagnosis with an esophagogastroduodenoscopy (try saying that three times fast!).  The doctors will put a tube down your mouth, through your stomach, and into your intestines.  There, they will take a biopsy of the lining of the intestines for a pathologist to look at for signs of lost villi.  Yikes.

There are still no standard testing procedures for diagnosing gluten sensitivity.  One fairly-new option is from Cyrex Laboratories. They do a blood test for all wheat and gluten proteins.  The bad news is that the test is fairly expensive and probably isn’t going to be covered by insurance.  If you’ve been gluten free for a while before the test, you may also get a false negative, making this a less than ideal option for diagnosis.  As Chris Kesser says, because of the limitations with testing for non-celiac gluten sensitivity, the best diagnosis option is to go gluten free for 30 days and see how you feel and then reintroduce it (if you dare) although I’d recommend giving it up indefinitely.

How Many People Have Celiac Disease or Gluten Sensitivity?

Gluten sensitivity is a completely different matter though.

Researchers have only recently recognized gluten sensitivity as a medical condition and there is still a lot of controversy around the subject.  Yet, studies indicate that non-celiac gluten sensitivity is a very real condition.  These studies show a negative reaction to gluten even when the celiac antibodies were not present (source).

Just because you don’t have celiac or gluten sensitivity, doesn’t mean you should dive into a bowl of croissants!

Even if all of the tests in the world show you don’t have celiac or gluten sensitivity or a wheat allergy, you still will be better off avoiding wheat.  This is too big of a topic to get into here.  If you are interested, I recommend the book Wheat Belly by William Davis, MD, which is all about how wheat is contributing to health problems like obesity.

A few years back, I had just started learning about the dangers of gluten.  Even though I wondered if this was something I should cut from my diet, here is why I almost didn’t go gluten free:  I was with a friend who had just switched to a gluten free diet and she offered me some bread.  I read the ingredients and there was hardly anything I could pronounce!  I said, “No thanks!  I’ll stick to my flour, yeast, and water stuff.” My grandmother and I both recognize that.  It just didn’t seem right.

As one analyst pointed out in a Bloomberg article about the gluten free diet fad, “Consumers, rightly or wrongly, have made a connection between gluten free and healthy.”  People hear that gluten is bad.  So, when they see that Chex cereal is now gluten free, they assume it must be healthy.  This is when it’s necessary to run things by our “common sense filter” in our noggins, guys.

I probably don’t have to tell you that the grain industry has some seriously-good marketing teams working for them.  Rather than trying to play up the supposed benefits of eating grains, they’ve decided to capitalize on the popularity of gluten free diets.  Dominos now has gluten-free pizza.  Pillsbury makes gluten-free cookie dough.  Restaurant chains have gluten-free options.   And the companies have no problem charging people more for food which they mistakenly assume is “healthy”. 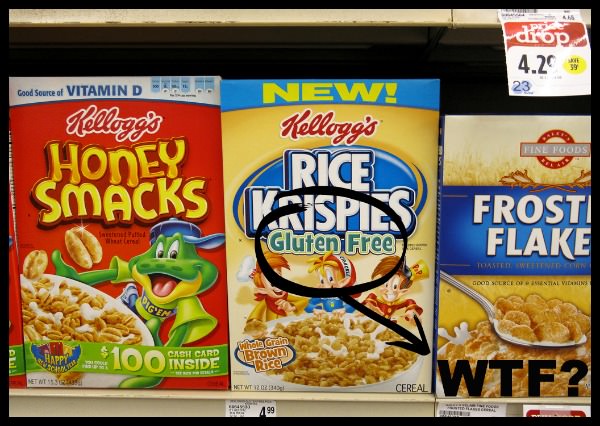 If this is the type of gluten-free food you are eating, although you might get rid of some of your gluten sensitivity symptoms you will still be far from optimal health.  If you’re trying to lose weight that gluten free bread will not be doing you any favors either.

Why Gluten Free is a Fad but Paleo Isn’t

Unlike the gluten free diet, the paleo diet isn’t just about eliminating one substance from your diet and replacing it with it’s gluten free counterpart.  Most of us actually think of paleo as a lifestyle more than a diet.  Paleo advocates eating real food from real sources.  That means eating foods which you can recognize and which are bodies were designed to eat.  Gluten free junk food is still junk food.  Gluten free bread with its “Hydrogenated Soybean Oil”, “fructose”, and “modified potato starch” is not food, guys.  It’s foodstuff. 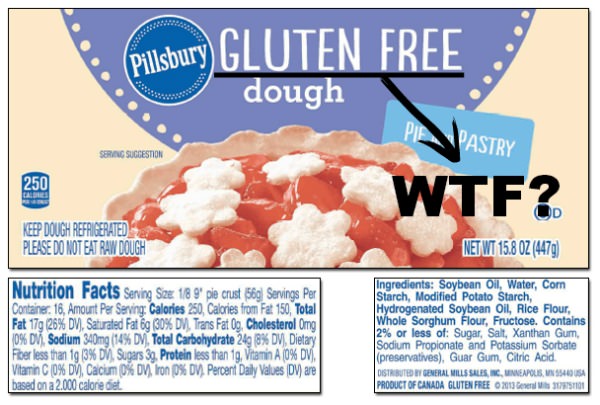 After 30 years of consuming foodstuff which led to a whole host of health issues, I’m ready to stick to real food as much as possible.

Now, for someone that is overwhelmed at the idea of switching to a paleo diet cold turkey from a Standard American Diet (SAD) I might suggest simply removing gluten from their diet as a great first step to getting healthy.  And sure, if that means switching out your pasta with gluten free pasta at first, that is definitely a start and may be what you need in order to feel just a tiny bit better so that you can have the energy to get in the kitchen and start preparing real food.  But, if you are just replacing everything with it’s gluten-free alternative, in the long run you may not notice much of an improvement at all.  That is why I wrote The Paleo Survival Guide: Getting Started with Paleo.  I know just how hard making this switch, especially with your entire family, can be.

Now, of course you don’t need to eat foods labeled “gluten free” to get gluten out of your diet.  Pastured meats, eggs, vegetables and fruits are all gluten free, not to mention full of nutrients your body needs.  Why not try eating these gluten free foods for a month and seeing how you feel?  Chances are you will feel so much better that you will want to keep gluten out of your diet and start working towards a paleo-style diet of your own.

Here’s the thing: by going gluten-free (if nothing else) chances are you’re ditching 90% off all processed junk and so long as you don’t fall for the gluten-free junk, you’re likely to end up with a plate full of real food.

Now, does this mean you’ll never find some gluten free waffles in my freezer?  No!  I also may have a gluten free cookie or cupcake a few times a year if I feel like a treat.  But, it is something that definitely falls into the 20% of my 80/20 paleo approach.  Similarly to how I feel about juice, I just want to clarify that it’s a treat, not a health food.

Looking to try our a gluten free diet but not sure where to start?  My ebook The Paleo Survival Guide: Getting Started with Paleo will show you exactly that.  It’s the book I wish I had when I got started on this path.

Looking for gluten free meal plans to show up in your inbox each week?  My favorite meal plans, that I use to this day are on sale until Tuesday 1/21 at midnight for 97 cents per week! (use code NEWYEARS at checkout).  You can even download a free one HERE. 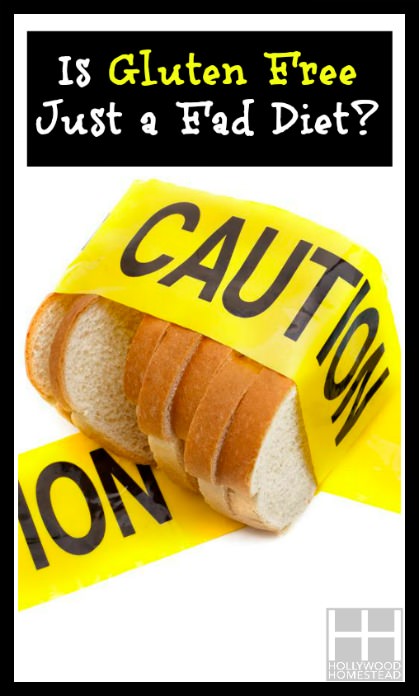 I’d love to hear from you!  Are you gluten free?  What does that look like for you?  Do you feel this whole gluten free thing is a fad?

8 thoughts on “Is Gluten Free Just a Fad Diet?”