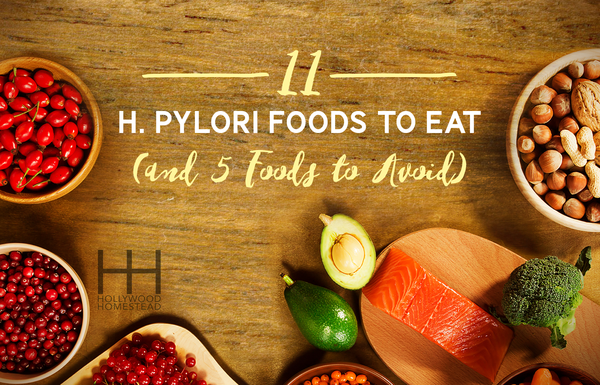 Between 1/3 and 2/3 of the world’s population is infected with the bacteria h. pylori.  Considering that h. pylori causes ulcers and is linked to cancer, this is something that should concern us all!

H. pylori is something which I personally dealt with. Like with many people, I had battled with GI symptoms for years before finally getting a diagnosis. I’m happy to say that I am now free of h. pylori and was able to treat the infection without harmful antibiotics.

If you aren’t familiar with h. pylori and what it does to the body, I suggest you first read this post about how to treat h. pylori naturally. You’ll want to get tested for h. pylori too using a stool test. 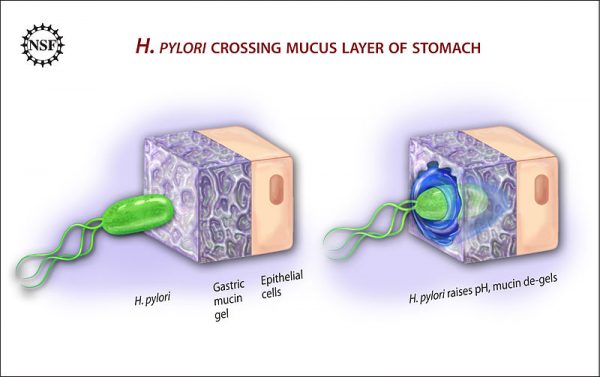 The good news is that there is now a test you can order without a doctor’s order. While I’m a HUGE fan of having a doctor’s guidance, I understand the need to know whether you have h. pylori or not before you invest in a practitioner.

As I talk about in my post about herbal antibiotics, plants are pretty amazing things.  Because they can’t run away or fight like animals can, plants have come up with cool ways to protect themselves.  One way is by producing chemicals.

Some of these natural plant chemicals kill fungi, insects, or anything else that might harm the plant – including bacteria.  It is no wonder that many pharmaceutical drugs today were derived from plants!

Below are just some of the many natural foods which can help with h. pylori by killing the bacteria or aiding in digestive health.  There are a lot of them, so I’ve only included the ones which are commonly available and have ample scientific evidence backing them up for h. pylori treatment.

Cranberries fight h. pylori in two ways.  First, they contain proanthocyanidins which kill the bacteria. Secondly, they prevent the h. pylori bacteria from adhering to the stomach mucus. Remember that cranberry juice you drink should be free of sugar and additives! (Source)

Broccoli and cabbage (as well as radishes, kale, and many other vegetables) belong to a family called Brassica.  These veggies contain substances called isothiocyanates.  These isothiocyanates, particularly one called sulforaphane, are very potent at killing h. pylori. The foods highest in sulforaphanes are sauerkraut juice, broccoli, and broccoli sprouts.  So add these to your diet to eradicate h. pylori. (Source 1, 2).  You can buy broccoli sprouts here.

The potent smell that these veggies produce when you cut them open? The smell actually comes from a potent antibacterial substance which is designed to protect the plant – and can also be used as a natural antibiotic.  No wonder studies show that people who eat onions have lower incidence of h. pylori infection!

Green tea has long been known for its antioxidants which can boost health.  One more reason to add green tea to your diet is that studies have shown it fights off h. pylori bacteria and also reduces inflammation.

Ginger is one of the best natural cures for stomach bugs, and its benefits extend to h. pylori infections too.  Studies have shown that ginger fights h. pylori by 1) acting as an antibacterial agent, 2) protecting gastric mucus, 3) reducing inflammation, and 4) inhibiting growth of h. pylori. (Source 1, 2)

I’ve long been a proponent of Manuka honey.  The stuff is wonderful! It contains a natural form of hydrogen peroxide in it which is great for treating bacterial infections.  Note that all types of honey do have some antibacterial properties, but Manuka honey has shown to be the most potent in studies. (Source 1, 2). You can buy manuka honey here.

Studies have shown that people who have high amounts of vitamin C in their diets are less likely to have h. pylori infection. The reasoning behind this is because Vitamin C is highly concentrated in the stomach mucus.  It likely reduces inflammation and protects against h. pylori infection.

Fatty acids don’t necessarily kill h. pylori bacteria.  However, having a high intake of healthy fats helps to reduce inflammation (for more on this topic, read this article about Omega 3 to 6 ratio).  By keeping inflammation down, the fatty acids inhibit gastric carcinogenesis. (Source 1, 2, 3)

Turmeric is one of my all-time favorite superfoods.  It is a potent anti-inflammatory, antimutagen, and antioxidant.  Now we can add antibacterial to the list too.

Multiple studies have shown how turmeric can eradicate h. pylori infections.  It is thought to work by blocking the shikimate pathway which is required for metabolic production in bacteria. (Source 1, 2, 3). You can buy quality turmeric here.

H. pylori causes major changes to the gastric environment, particularly that it changes the stomach’s pH. This in turn causes a change in the gut flora. And, if you didn’t know yet, gut flora is very important to overall health!

A probiotic is any bacteria which has positive effects when taken.  In the case of h. pylori, certain probiotics can fight off the harmful bacteria while healing the stomach lining and reducing symptoms.

The two types of probiotics which are particularly promising for h. pylori treatment are:

Ortho Molecular makes a really good probiotic which contains both of these probiotics, and also doesn’t contain any probiotics (which could feed your h. pylori infection) or substances harmful to the gut.  You can buy it here. 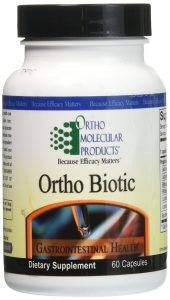 Foods to Avoid with H. Pylori

I can’t emphasize how important diet is to h. pylori treatment. Not only could your diet be aggravating symptoms, but it could be causing h. pylori to proliferate!

Bacteria are living things.  Just like all living things, they need to eat something – and they particularly love carbohydrates.  So, it is no surprise that studies have found that people who eat more carbs have higher rates of h. pylori infection.

You can’t get rid of carbs completely (healthy fruits and veggies are going to have some carbs in them).  However, you can make sure that you get rid of all of those sweets from your diet, ditch bread and grains (which wreak havoc on  your gut anyway), and up your protein consumption instead.

Note that soft drinks are particularly terrible for h. pylori. Studies show a correlation between soft drink consumption and h. pylori.  Since they are loaded with sugar, chemicals, and preservatives, there is absolutely no reason you should be drinking these! (Source 2, 3)

Salt isn’t directly going to feed h. pylori and make the infection worse.  However, salt will increase your risk of getting cancer if you have an h. pylori infection!

Why? The theory is that salt disturbs the viscosity and integrity of the stomach mucus, thus making it easier for h. pylori to colonize it and cause damage.  So lay off the salty foods!(Source 1)

One of the things you’ll find across zillions of webpages talking about h. pylori diet is that you shouldn’t eat pickled foods.

Wait, but I thought pickled foods were good for my gut!

Yes, studies show that eating pickled foods increase risk of gastric cancer with h. pylori.  What they fail to mention is that these are commercially-bought pickled foods that are made with vinegar and lots of salt.

Eating lacto-fermented pickled foods is actually good for h. pylori because they contain healthy probiotics which can fight h. pylori.  So, go ahead and eat fermented pickles and skip the supermarket ones. (Source 1, 2)

These two substances are notorious for aggravating ulcers.  Wait until your stomach heals until you start consuming them again.

5. Foods that Irritate the Stomach

H. pylori damages the lining of the stomach and cause inflammation. Any foods which further damage the GI tract are going to be terrible for your healing process.

This means avoiding all processed foods, sugars, and gluten — foods which could lead to leaky gut syndrome. When your stomach is healthy, it will be in a much better position to fight off h. pylori!

Want to Go Beyond Diet for Treating H. Pylori?

While eating the listed h. pylori foods (and avoiding the other foods) will help get your h. pylori under control, it might not be enough to eradicate it completely.

I took my h. pylori treatment to the next level by using supplements (you can read about it here). Two of the best supplements for h. pylori are mastic gum and matula tea.

Learn more about mastic gum here, or buy it now 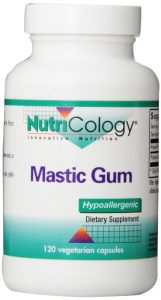 Learn more about matula tea here, or buy it now 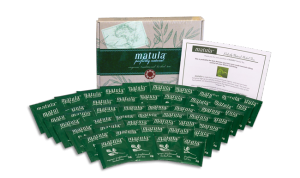 To show it that it really is possible, here are my before/after test results.  It feels good to get your GI health under control!

Have you tested positive for h. pylori? How are you treating it? I’d love to hear from you in the comments! 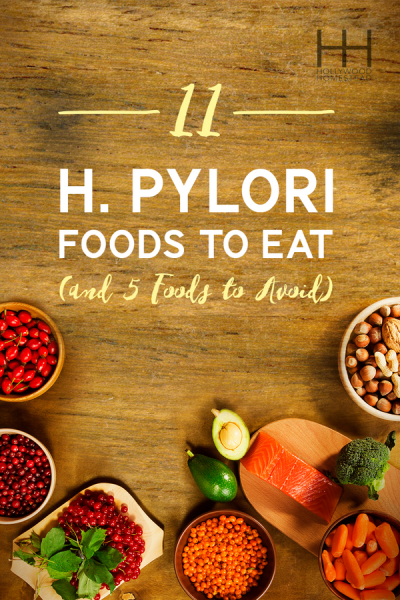