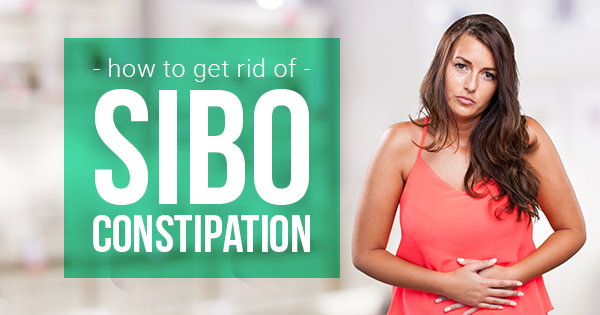 Let me preface this post by saying there is no “pretty” way to talk about SIBO constipation.  Discussing bowel movements is still taboo in our cultures and a lot of people don’t get the help they need because they’re afraid to speak openly about their problems.  But, if you have SIBO constipation, this is something that you absolutely must address!

On a personal note, I’m really grateful to all of the SIBO sufferers who had the courage to openly talk about the problem in forums and website comments.  By talking openly about SIBO constipation, these people show us how common of a problem it is and encourage others to seek help.  Now that I’ve gotten that out of the way, let’s talk about how to treat SIBO constipation!

Constipation is a Symptom of SIBO

A lot of people talk about SIBO constipation as if it were a disorder in itself.  Really, constipation is a symptom of SIBO.

Sure, taking laxatives and other constipation treatments might help for a bit – but they aren’t going to address the underlying problem which is causing SIBO in the first place.   I’m all for managing symptoms (and I’ll tell you how to manage your SIBO constipation below), but you must look at the bigger picture.

There are three main types of SIBO:

I talk about the difference between hydrogen and methane SIBO in detail in this post.  In a nutshell though, here’s what you need to know:

When you have SIBO, the overgrowth of bacteria causes food in your gut to ferment because it can be fully broken down.  The process of fermentation creates hydrogen.   Hence why SIBO breath tests look at hydrogen levels.

However, the small intestines also contain archaea.  These are different than bacteria. They feed off of hydrogen and create methane as a byproduct. Methane slows colonic transit time. (Source)

Test for Hydrogen and Methane SIBO

Because archaea will consume hydrogen, you can get a negative result on a hydrogen test but still have SIBO.  That is why you MUST test for both hydrogen and methane when diagnosing SIBO.  If you have SIBO constipation and not diarrhea, then you probably have methane SIBO.

Unfortunately, treating methane SIBO is harder than treating hydrogen SIBO.  Archaea are more resistant to antibiotics (not that antibiotics are very effective for SIBO anyway).

I personally had the methane dominant SIBO type and it took a comprehensive approach involving herbal antibiotics, prokinetics, probiotics, and elemental diet in order to get rid of my SIBO for good.

Note: If you still haven’t tested for SIBO, there are now tests you can take at home.  I’m all for getting a note from your doctor, but sometimes you need a diagnosis before investing in a doc.

I probably don’t have to tell you that SIBO constipation is just as bad as diarrhea. While you might not be running to the bathroom every 10 minutes, constipation can be painful.

Beyond the pain, SIBO constipation can lead to other problems as well.  As Digestive Health Institute notes, constipation increases the workload of the body.

“Metabolic waste, excreted toxins and fermentation products accumulate in the intestines with constipation.  These byproducts of digestion and liver detoxification (toxins) are absorbed back into the blood stream, causing the liver to increase its workload.  Eventually, the extra metabolic waste in your bloodstream can cause symptoms and illness.”

This is just one more reason to take care of the symptom of constipation while you work towards curing your SIBO completely.

Please don’t rush out and take the first laxative you find for SIBO constipation! Even if it helps the immediate problem, some constipation treatments could actually make your SIBO worse in the long run.  Below are some good SIBO-safe treatments for constipation.

When someone has constipation, the first treatment recommended is usually to increase fiber intake.  This is probably one of the WORST things you can do for SIBO constipation!

While I don’t know of any studies which looked specifically at fiber as a treatment for SIBO constipation, there have been several on fiber for IBS constipation (and as many as 84% of IBS cases are really misdiagnosed SIBO).

These studies (such as this one or this one) found that taking fiber did not improve constipation symptoms or quality of life.  On the contrary, a 2012 study found that eliminating fiber relieved constipation.

Since we know that SIBO is caused by bacteria feeding off of carbs (including fiber) in the digestive tract, it should be no surprise that fiber does not solve SIBO constipation.

Unfortunately, this is pretty tricky because most plant foods contain both soluble and insoluble fiber.  I’m not a fan of looking up the nutrient info of every single thing I eat – assuming that you can even find the amount of each type of fiber for a food!

As a general rule, leafy greens and stalks are safer sources of fiber for SIBO.  The supplement Cellulose from Nutricology is also highly-recommended.

Download a free YES/NO SIBO foods list here to find out what fiber-rich veggies are good to eat.

These are absolutely the BEST THING YOU CAN TAKE FOR SIBO CONSTIPATION. Prokinetics work by stimulating your migrating motor complex (MMC).

The MMC is the wave-like movements which start in your stomach and travel though the small intestine and out through the large intestine. These wave movements are thought to have a “housekeeping” function to flush waste out.

In fact, a disruption in your MMC might be the cause of your SIBO in the first place!

Note that the MMC doesn’t go past the large intestine.  That means prokinetics won’t make diarrhea worse and are recommended for SIBO-C and SIBO-D.

I used these prokinetics for treating my SIBO:

You can read more about prokinetics and the MMC here.

Even though your doctor might prescribe you a laxative for your SIBO constipation, it doesn’t necessarily mean it will help.

Instead, you’ve got to work on increasing transit time.  That’s why prokinetics are the best treatment for SIBO constipation.

However, a lot of SIBO sufferers still end up with hard stools – especially because so many types of fiber are off limits on the SIBO diet and because stool is spending so much time in the GI tract.  (Source) Laxatives can help in these cases.

There are 3 main types of laxatives which are SIBO-safe for treating hard stools:

Avoid taking a stimulating type of laxative!  Those laxatives work by causing the intestines to spasm so the stools are forced out.  These laxatives can damage the lining of your intestines, which is definitely not okay for someone who already has SIBO. However, there are some emergency situations where you might have to take a stimulating laxative for SIBO constipation — like if you haven’t gone in a week.  If your doctor tells you to take one, then listen to your doc.  Just don’t grab stimulating laxatives as a first-line resort.

Exercise is a great treatment for most types of constipation.  However, exercise does little for slow-transit constipation (which is what SIBO constipation is).

However, there are some special types of exercises which can help with slow-transit constipation.

Enemas can help with constipation not just because they clean out the colon.  They also help stimulate nerve receptors in the colon. (Source)

I thought about doing a coffee enema for my SIBO, but in the end decided not to do it (basically, I got scared).  So, unfortunately I can’t speak to my personal experience.  However, a lot of people do say that enemas help reduce their symptoms for a day or two after doing them.

If you are going to do an enema for SIBO, then consider one of these types:

Dr. Kharrazian in his book on brain health recommends the coffee enemas not just because they cleanse the colon, but because they stimulate the motility. If you aren’t used to consuming caffeine, be warned that some people say coffee enemas kept them up for days!

Another thing to be warned about with enemas for SIBO is that you shouldn’t become addicted to them.  On her blog, Dr. Lisa Giusiana warned one reader that there is a risk that pressure inside the colon could cause the ileocecal valve to open and allow colon contents to go upwards.  So, BE GENTLE and DON’T OVERFILL THE COLON DURING ENEMAS!

These toilets are the norm in many countries and now are associated with many benefits.  Compared to toilets that you sit on, squat toilets put the body in better alignment for eliminating stool.  You’ll put less strain on your sphincter and reduce the likelihood of hemorrhaging.

This is pretty impractical for most people though (I’d worry about falling in).  Instead, you might want to get a bench you can rest your feet upon to put in front of the toilet.  Amazon sells these “anti constipation stools” that you even fold up. 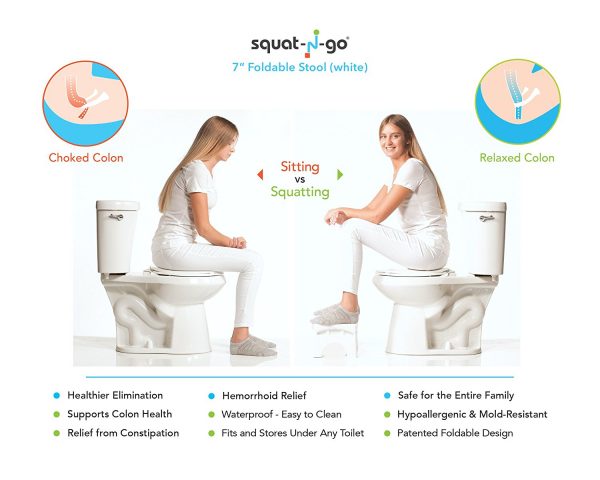 Another great way to temporarily relieve constipation from SIBO is magnesium citrate.  Magnesium helps calm the body, so it is great for constipation as well as insomnia and stress.  I like the supplement Natural Calm.

Finally, you can use glycerin suppositories for temporary relief from constipation.  They won’t help with slow transit time, but they do make it easier to pass stools.

Don’t Ignore the Root Problem of Your SIBO!

All of these treatments for SIBO constipation only help with the symptom of constipation.  While it is okay to use them to get some much-needed relief, don’t start to rely on them to the point where you don’t take steps to actually cure your SIBO!

Want to learn how to actually cure your SIBO instead of just treating the symptoms? Read my eBook The SIBO Solution.  Learn more here.

Have you dealt with SIBO constipation? How’d you find relief? I’d love to hear from you in the comments! 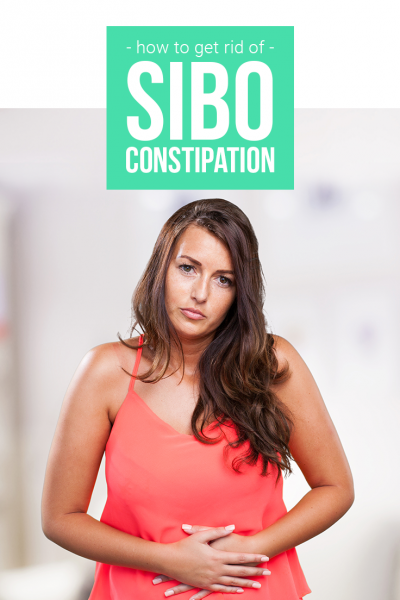 14 thoughts on “How to Get Rid of SIBO Constipation”