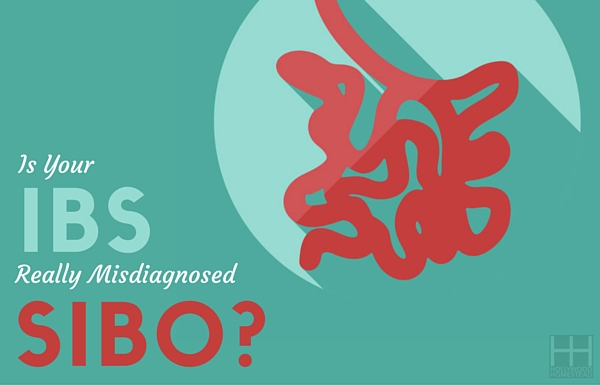 Around 10-15% of the US population suffers from Irritable Bowel Syndrome.  Considering how prevalent IBS is, you think that doctors would take it more seriously.  Instead, it usually gets dismissed and patients are told to just take a fiber supplement.  This is particularly unfortunate since in as many as 84% of cases, IBS might really be misdiagnosed SIBO.

Note that this topic is really personal to me.  I dealt with GI symptoms for a long time — which were diagnosed as IBS — until I finally learned about SIBO and had myself tested.  Yes, I tested positive for SIBO.  If I had known about SIBO in the first place, I could have spared myself lots of tests and agony and gotten started with curing myself right away.

Compared to the large intestine (which is teeming with about 10-100 billion bacterial organisms), the small intestine is pretty sterile. It only has about 100 thousand organisms in it. These bacteria are very important for helping us digest food and keeping cells of the GI tract healthy. Even a slight imbalance to the bacterial flora can cause all sorts of symptoms.

The main symptom which occurs with SIBO is bloating. By bloating, I mean you get a serious belly which can make you look 6 months pregnant. The bloating occurs because the bacteria in your gut eat carbohydrates and produce gas as a byproduct. The more bacteria you’ve got in your gut, the more gas you will have in your belly after eating carbs.

That gas has to go somewhere, which is why another common symptom of SIBO is flatulence.

The excess gas can also result in severe pain when it pushes against the wall of your small intestine. People with SIBO often have damaged gut walls, and this just makes the pain worse.   To understand this phenomena, think about how your skin feels when you have a sunburn. Even the slightest touch can feel incredibly painful. The same thing happens in your gut when cells are damaged.

SIBO can also cause diarrhea or constipation, or both. SIBO is actually classified by which of these symptoms the patient has.

With SIBO-D, the problem is caused by bacteria that produce hydrogen gas. It is thought that these bacteria also produce toxins which irritate the gut, which is why it leads to diarrhea.

In addition to bacteria in your gut, you also have organisms called archaea. For those of us who aren’t biologists, archaea probably seem a lot like bacteria since they are both single-celled organisms. However, it is really important to know that bacteria eat carbs and produce hydrogen gas. Archaea eat the hydrogen gas produced by bacteria and produce methane as a byproduct.

This is very important to know when you get tested for SIBO. Many doctors will only do a hydrogen test, which won’t tell you if you’ve got an overgrowth of archaea causing problems. If the archaea are eating up all of your hydrogen, you will get a negative hydrogen test but a positive methane test. Researchers still aren’t exactly sure why archaea cause constipation. One theory is that the archaea hinder motility because they reduce serotonin levels in the gut.  (Source)

You can order the test and it will be sent to your home (note that some states still don’t allow you to order tests; sorry).  You can learn more about the types of SIBO breath tests here.

***Use the coupon code HOLLYWOOD  to get an additional $5 off.  The coupon applies to all lab tests that you order!

Here is where you really need to sit up and take notice: upwards of 84% of IBS patients test positive for SIBO with a hydrogen breath test! (Source)

Based on this number, there is obviously a very strong link between IBS and SIBO. However, researchers aren’t exactly sure what the link is between them.

One possibility is that many cases of IBS are really misdiagnosed SIBO. This is backed up by the fact that treatments for SIBO often cure IBS too. You’ll notice that the symptoms of SIBO are virtually the same as those of IBS, which is why it would be so easy for a doctor to misdiagnose SIBO. Another reason for the misdiagnosis is simply because many doctors have never even heard of SIBO.   To put this into perspective, IBS was only mentioned in medical journals in the 1950s (which is still very recent). SIBO is an even more recent discovery with its connection to constipation only being uncovered in 2004.

If you have IBS, I strongly suggest that you go and get tested for SIBO. Curing SIBO isn’t a piece of cake, but at least there is a cure. I wrote about treatment protocols and my own experience with them in my last book, The SIBO Solution.

Another possible explanation between the link is that IBS causes SIBO.   As I talk about in this post about how food poisoning may cause IBS, Dr. Mark Pimentel and his team believe that 20% of people who get exposed to the Cdt-b toxin (which is found in IBS) will go on to develop SIBO.

Patient gets case of food poisoning ->

Motility issues are considered one of the key underlying causes which allows SIBO to happen. More specifically, it is the Migrating Motor Complex (MMC) part of motility which causes SIBO. The MMC acts as a “housekeeper.” Between meals, it sends a sweeping wave of movements through the gut to push out any leftover food or excess bacteria. If IBS has damaged your gut nerves and hindered the MMC, then you are going to get excess bacteria in your gut.

Here is where things get even more complicated. In the previous theory, nerve damage caused SIBO. But it could also be that SIBO causes nerve damage in the gut. For example, a patient gets SIBO (such as by taking antibiotics or eating a bad diet). Now, there is too much “bad” bacteria in the gut and not enough “good” bacteria. In a healthy gut flora, the good bacteria play an important role in stimulating the growth of the gut lining. Without enough of them, the gut cannot grow or heal itself effectively. The bad bacteria damage worsen the problem by physically damaging the lining of the gut. Read more about the role of gut flora here. (Source 1, 2)

The damaged nerves in the gut means that the gut and brain can’t communicate effectively and you get IBS. Since motility is hindered, the gut still can’t clean itself out and the SIBO gets worse. In this way, you end up in a vicious cycle.

Again, a lot of research still needs to be done before we can say with any certainty what the link between IBS and SIBO is. However, with as many as 84% of IBS patients testing positive for SIBO, you owe it to yourself to get tested.

Want to learn more about SIBO, how it is diagnosed and how to treat it? Download my ebook The SIBO Solution.  It will tell you how to cure GI symptoms for good, and even includes gut-friendly SIBO recipes. 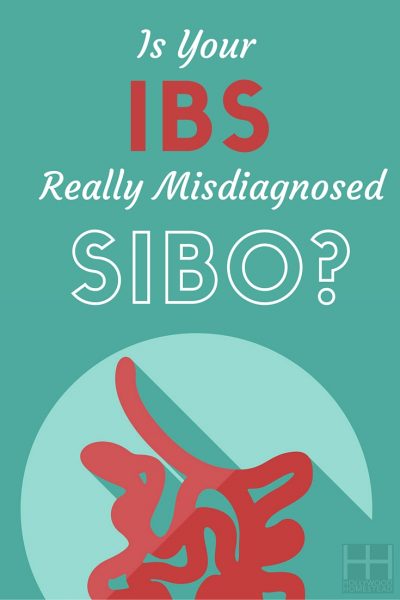 4 thoughts on “Is Your IBS Really Misdiagnosed SIBO?”