I’ve dealt with a lot of diagnoses in my life, but treating SIBO was the hardest battle of them all.  It took multiple doctors before I even got a diagnosis, and then consultations with many specialists before I found a method which actually cured my SIBO instead of just treating the symptoms.

This experience treating SIBO is something that I talk about in my eBook The SIBO Solution.  There, you can read all about:

I’ve also included a lot of great SIBO-friendly recipes so you can still eat tasty food while treating SIBO.

The good news is that I am still SIBO-free two+ years after I started this battle. But there is one important thing I forgot to add in the book: How to transition your diet after healing SIBO.

In order to cure SIBO, virtually everyone is going to have to change their diet in some way.  In my case, I was surprised to learn that even healthy foods like bone broth could be bad for SIBO.

Other off-limit foods on the SIBO diet (or ones that need to be eaten in moderation) include:

*You can get a complete yes/no list of SIBO foods in The SIBO Solution eBook.

Once your gut bacteria levels are balanced again though, you should be able to safely eat those foods again.

But that doesn’t mean you should rush out and eat tons of these off-limit SIBO foods!

Every case of SIBO is different.  Some people are fine with certain foods but have problems with other ones.

In my case, garlic was my nemesis. Even a small amount of garlic would aggravate my SIBO symptoms.

So, for me, garlic was the LAST thing I dared to try.  Diving into a big old bowel of garlic dip would not have been a good place to start!

Instead, I started by slowly adding foods back to my diet after SIBO – and I started with foods that I knew weren’t really upsetting to me in the past.  I tested them in small quantities.  If I didn’t have a bad reaction, I continued to eat the food and gradually increased quantity.

One I got used to those foods, I started adding back the foods which were especially problematic to me.

It Takes Some Time for the Body to Adjust

Nowadays, garlic is no biggie for me to eat – but it took some time even after I had healed my SIBO.

Think of it like a baby eating solid food for the first time.  The foods you give are all safe, and the baby is ready to eat solids – but you still take it slowly so the baby’s body can adjust.

Well, your body is going to be like that after coming off the SIBO diet – especially if you did a hardcore diet such as the elemental diet for healing SIBO.
​

Some Foods You Should NEVER Add Back

When I say transition back to your “normal” diet, I want to emphasize that some diets should not be considered normal.

If you were eating junky food stuffs before treating SIBO (such as refined sugars, grains at every meal, gluten, and processed foods), it is very likely that those junk foods caused your SIBO.  At the very least, junk foods contribute to SIBO.

To improve your health and remain SIBO-free, you will need to make long-term changes to your diet.  My personal approach is the paleo diet.  You can read about What Is Paleo here.

Every Case of SIBO Is Unique

One of the annoying things about treating SIBO is that every case is so unique, so there is no one-size-fits-all solution.  The same applies to transitioning after SIBO.

You just need to go slow and see what works for you.

Try not to freak out if you have a bad reaction to a certain food.  I know it is a bummer, but stressing about food isn’t going to help you stay SIBO-free (stress is a cause of SIBO).

​Have you cured yourself of SIBO? How did you transition back to eating normally afterwards? I’d love to hear your experiences in the comments! 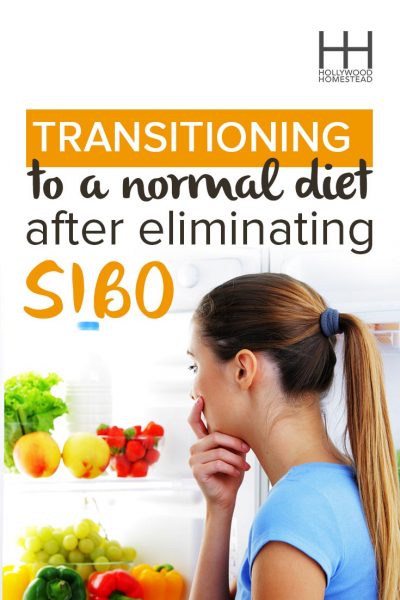 6 thoughts on “Transitioning to a Normal Diet after Eliminating SIBO”