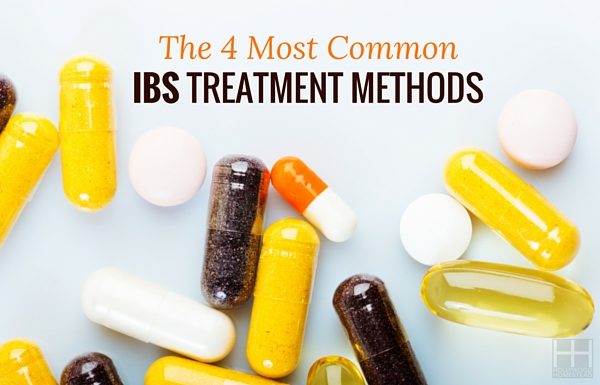 Despite the fact that 10-15% of the population suffers from IBS, doctors don’t really know much about it or how to treat it.  The good news is that medical knowledge about IBS has advanced a lot in the past few years.  We now know that IBS is caused by a problem with the gut-brain axis, and that the best way of treating IBS is to reset the gut flora while healing the gut.

Unfortunately, unless you’ve got a really good doctor, you probably aren’t going to get this advice.  Instead, you will probably be told to take one or more of these 4 common IBS treatments.

None of these four common IBS treatments will cure your IBS.

All they do is help alleviate the symptoms.  Here, I will talk a it about how these treatments help IBS symptoms, but why you shouldn’t rely on them for the long term.

If you have IBS with constipation, the first thing your doc will probably tell you is to eat more fiber. As I talk about in this post about bad diet and IBS, fiber is very important for having healthy bowel movements because it makes stool softer and easier to push out. There are also many healthy bacteria in your gut which eat fiber. When they don’t have enough fiber to consume, they can start to consume your gut lining instead, leading to serious damage.

The problem with the “eat more fiber” advice is multifold. Firstly, by the time you have IBS, eating more fiber isn’t going to help you much. Your gut bacteria has already become unbalanced and there may be significant damage to your gut. No amount of fiber can help once you’ve gotten to this point.

Eating fiber foods might even contribute to the problem at this point. Many high-fiber foods (such as whole grains) are also gut irritants.   Bacteria in our guts feed off of fiber, so eating a high-fiber diet can further disrupt the balance of your gut bacteria. This is why many fiber foods are banned on the Low FODMAP diet.

Further, fiber doesn’t actually cause you to go to the bathroom. It just makes stool softer.   Constipation and diarrhea in IBS occurs because of motility problems (remember that motility is the wave-like motions of the GI tract which propel food and waste through it). With IBS-C, motility is going very slow or has halted so stool isn’t being pushed out.  Fiber won’t get you to go to the bathroom. It will just make it less painful when you do finally go.

After fiber, antispasmodics are the most commonly prescribed treatment for IBS. These are medications which cause the muscles in the GI tract to relax. Since many IBS symptoms (such as abdominal pain) are caused because the muscles are contracting too intensely, taking an antispasmodic can help.  (Source)  Once again though, these won’t help you in the long run. The reason that your GI muscles are contracting too intensely is because of a dysfunction in the nervous system. You really need to be working on fixing this issue.

Since antispasmodics slow down gut motility, they could also cause harm in the long run. When your motility is slowed, you can end up with a buildup of bacteria in your gut which leads to SIBO — and SIBO may be the real cause of your IBS!

It is ironic that antibiotics are often prescribed for IBS, since antibiotics could also be causing IBS. When you take an antibiotic, it indiscriminately kills off bacteria – including good bacteria in your gut. As a result, you can end up with unbalanced gut flora. Or, in the case of IBS, an even worse unbalance.

So why do antibiotics sometimes relieve IBS symptoms?

First off, note that antibiotics rarely have benefits for IBS. When they do help, the benefits are only short-lived.

To learn more about SIBO, its link to IBS, and how to cure it, download my ebook The SIBO Solution. 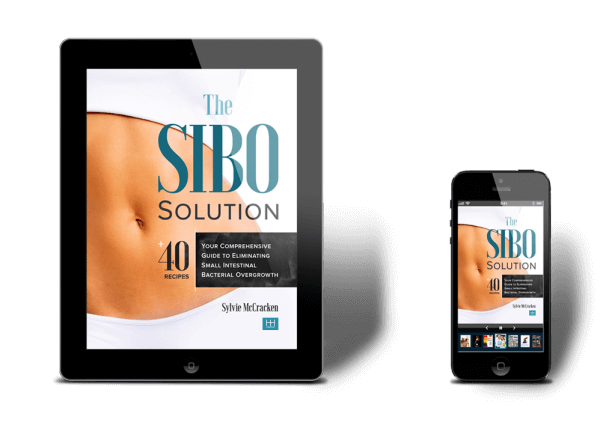 In addition to regulating our mood, serotonin has a very important role in regulating motility and secretions. In other words, we rely on serotonin to move food and waste throughout our body. And remember that most IBS symptoms are related to motility. Serotonin also sends signals related to pain and nausea. (Source)

Antidepressants don’t contain serotonin, nor do they cause the body to produce more. Rather, they work by blocking the reabsorption of serotonin. This way the body’s serotonin stays in circulation longer.

While antidepressants might help your IBS, there are drawbacks. Firstly, there are numerous symptoms associated with these drugs. Even if they do work, it is going to take a long time for them to show any benefits – usually about 4-6 weeks. And, once again, the biggest issue with relying on antidepressants for IBS is that they don’t treat the underlying problem.

Why wouldn’t your gut be getting enough serotonin? It could be bad diet causing IBS (you need nutrients like tryptophan to produce serotonin). It could be that the nerves in your gut is severely damaged. Or maybe your serotonin levels are just fine and the problem has to do with other factors which influence motility, like your gut flora is unbalanced.

What IBS Treatment Should You Use?

Again, I want to emphasize that these IBS treatments will only help you alleviate the symptoms of IBS.  They don’t cure the underlying problem which caused the symptoms in the first place.  The first step to curing IBS is to identify the causes and get them out of your life.  Then you need to work on resetting your gut flora and healing the gut.  I talk about this in my ebook, Solving the IBS Puzzle 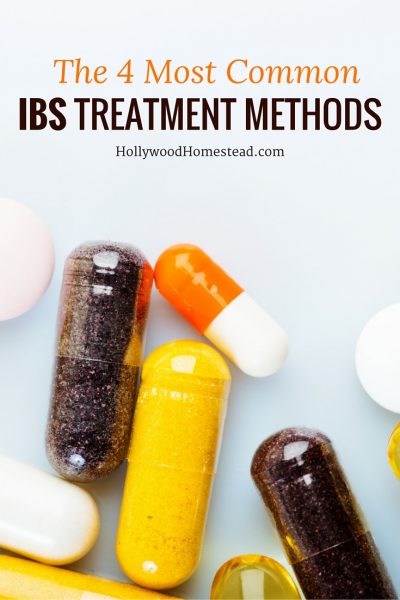 2 thoughts on “The 4 Most Common IBS Treatment Methods”