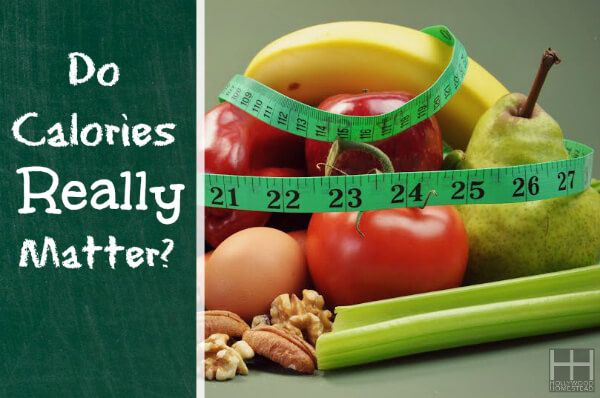 Want to lose weight?  It’s simple, right? Just consume fewer calories than you burn.  There are even all those handy calorie calculators to help you figure out how many calories you burn daily.  And there is no shortage of apps which will tally up how many calories you are eating.  According to pretty much every diet book out there, 1 pound = 3500 calories.  So, you could reduce your calorie intake by 500 calories per day and you’d lose 1 pound per week.

By following this method, you probably will lose about a pound per week – at least at first. And sure, calorie restriction can help you lose some weight but it’s not the best approach in my opinion.  If you’ve read my paleo journey, then you know that I tried this calories-in/calories-out approach dozens of times.  At first, I’d be happy to see the numbers dropping from the scale.  But, eventually the weight loss would stagnate.  I’d go back to my “normal” diet (it’s no fun being hungry all the time!).  Low and behold, I’d quickly gain more weight than I’d lost! Sound familiar?  My story really is pretty typical.

If weight loss were really as simple as counting calories, we wouldn’t have an obesity epidemic on our hands.  If you have significant weight to lose, you’ve got to ditch the old theory about calories-in/calories-out.

What is a Calorie Anyway?

The system which is used to measure calories in food was invented by Wilbur Olin Atwater in the 1900s.  Here is a summary of how it works:

Atwater measured the energy of foods by burning them.  1 calorie is the amount of energy required to heat water by 1 degree Celsius.

Based on averages from the foods he burnt, the Atwater system says that:

Obviously, there are some problems with this system.  First off, the foods that Atwater was using in his experiments 100+ years ago are a lot different than the stuff most of us eat today.  Even with this issue aside, there is the whole matter that our bodies are NOT furnaces.  When we eat a piece of cake, it isn’t getting burned (literally) like the foods in the early calorie experiments.  When food enters our bodies, it initiates a really complex chain reaction involving chemicals, enzymes, and hormones.

Anyone who’s sat through a science class knows that energy can’t be created or destroyed.  It simply changes form.  Depending on the type of food consumed, it can go through a lot of different processes before being turned into energy our bodies can use.  This is why some foods are fattening and others aren’t quite so much.

For example, 30% of the calories in protein are spent just on digesting it.  Protein also makes you feel full and can boost metabolism.  By contrast, fructose can cause insulin spikes, which lead to fat storage.  Fructose also won’t reduce your hunger hormone ghrelin, which means you still feel hungry even after eating massive amounts of sugary junk. This is just one of the reasons I don’t give my kids juice.

It takes different amounts of energy and different hormonal processes to digest food and convert them into energy our bodies can use.  Summing them up as “calories” is really inadequate and isn’t going to help you maintain weight loss or achieve long term health.

A Calorie is NOT Just a Calorie

According to the calories-in/calories out approach to weight loss, it doesn’t matter what you eat so long as you consume fewer calories than you burn.  But calories are not all the same!  A good example of this is nuts.

For a long time, nuts were shunned by diet plans because they contain too many calories.  100 grams of almonds (which is a pretty small amount) has 576 calories!  That’s more than a McDonald’s Big Mac and more than ¼ of the recommended daily intake of calories for most people.  Given the choice between eating a small handful of nuts or a Big Mac, I have a pretty good guess as to what most junk-food addicted people are going to choose…

But scientists have finally got around to proving what nature has long known: that a calorie is NOT just a calorie.

In one study by the American Society for Nutrition, it was found that 32% of calories from almonds aren’t really being absorbed2.   They discovered this by analyzing the poop composition of people after eating nuts.  If you’ve ever looked at your own poop after eating a lot of nuts (I’m not trying to be gross here!), then it isn’t too surprising that the scientists found people had more fat in their poop after eating nuts than before.  There are dozens of these studies (most of them analyzing poop) which show that the calories we absorb from nuts aren’t the same as what they’ve been labeled with.  No wonder that the big study of nut consumption and body weight in the American Journal of Clinical Nutrition found that people eating nuts were more likely to lose weight, even though they were consuming more calories!3

Why would nuts help weight loss?  It isn’t just that we are overestimating the number of calories in them.  The big AJCN study cited reasons like that the protein and fiber in nuts help us feel full, that nuts boost metabolism (it takes energy to burn all that protein!), and nuts boost energy levels.

I’m not saying that nuts are the perfect food.  Some of them are a big high in Omega 6, there is phytic acid to worry about, and they aren’t recommended for people with autoimmune conditions because they can be inflammatory and not really gut healing.  But, as far as the whole calorie question goes, they are a good example because of all of the research done.   If only someone would do as much research into, say, the difference in how we use/absorb calories from grass-fed beef or lamb liver versus a McDonald’s cheeseburger.  Hint: stick with the grass fed liver.  Your hormones and midsection will thank you.

Interestingly, the studies find that we absorb fewer calories from whole nuts than from processed nuts like nut flours and even nut butters.  If this is true with nuts, just imagine what the difference must be between real foods and super processed foods, like that grass-fed liver and the McDonald’s burger!

Still not convinced that calories don’t matter?  That you should be religiously counting each calorie in and avoiding going over the prescribed 2200 RDA (or whatever number some calorie calculator determined for you)?  Well, consider the evidence that reducing calories can cause weight gain.

You know how when you first start a diet the weight comes off easily and quickly.  Then, as you go on, it becomes harder and harder?  There are two reasons for this.

First off, our metabolic rate is actually determined by the amount of body mass we have.  The bigger you are, the more energy you need to sustain yourself.  As you lose weight, you have less body weight and your metabolism slows down!  To make matters worse, low-calorie diets cause our bodies to break down muscle instead of fat.  Muscle is a lot denser than fat, so your body mass really drops – and so does your metabolism!  Good luck trying to maintain your body weight (nevertheless lose weight) once your muscle mass is gone!!!5, 6, 7

Secondly, reducing calories will put your body into a survival mode.  A 2006 study published in the Journal of the American Medical Association found that people on a very low-calorie diet experienced significant drops in their metabolic rates which were not just because of the expected drop from decreased body mass.8

So, by sticking to one of those low-calorie diets that everyone seems so fond of, you are basically slowing your metabolism – a recipe for weight gain!

I didn’t get into paleo because of weight loss.  Heck, by the time I found out about paleo, I had given up on losing weight!  I went into the diet with the goal of fixing some serious health problems.  At the start, I was eating an INSANE amount of calories every day.  So, you can imagine my surprise when I found that I was losing weight even with all the calories.

This is where I had the real revelation: I was overweight but still undernourished.  This was from years of starving myself of nutrients, rollercoaster dieting, and a low-fat mostly vegetarian diet.

Overweight and undernourished? This is actually a common problem in many societies.  One study in shantytowns in Brazil even found a 30% rate of malnourishment in children but an obesity rate of about 7%!9  When our bodies are undernourished from a diet of processed junk foods, we don’t use energy efficiently and end up with stored fat.  Without the vitamins and minerals we need, and the hormonal rollercoaster caused by chemicals in foods, we feel constantly hungry.

Being overweight is NOT the problem.

Being overweight is a symptom of a bigger problem. Stop focusing on the goal of losing weight and instead focus on what is good for your body.  Give it REAL food which is full of nutrients like vitamins, minerals, fiber and fat (yes, fat!)  Forget, at least for now, about quantity and focus on quality of food.  And let’s not forget about the importance of reducing stress and getting enough sleep. Once your body is healthy, it will start correcting itself.  The book The Nourished Metabolism explains this very well.  You can read my review of it here.

Once you get further along with your paleo journey, then you can start focusing on quantities and things like the ratios of macronutrients in your diet.  If you are an athlete, pregnant or nursing, or have thyroid problems, you might need to follow certain dietary habits like getting more carbs to fuel your performance, nourish your little one or support your thyroid.  If weight loss is your primary goal, then a paleo ketogenic diet might be the way to go.  Yes, tools like a Fitbit can be great for period check-ins to gauge what you are consuming on an average week, but they shouldn’t be used o drive yourself into orthorexia by focusing on every morsel you consume for long periods of time.

The bottom line: If you’re just at the beginning of your real food journey, stop worrying so much about calories and eat nutrient-dense, REAL foods.  Get plenty of sleep and let go of stress.  Your body will get healthy and you might be surprised to see the weight shedding without even trying.

What are your thoughts on calories? Do they matter? Have you tried calorie counting? Would love to hear from you below!

2 thoughts on “Do Calories Really Matter?”