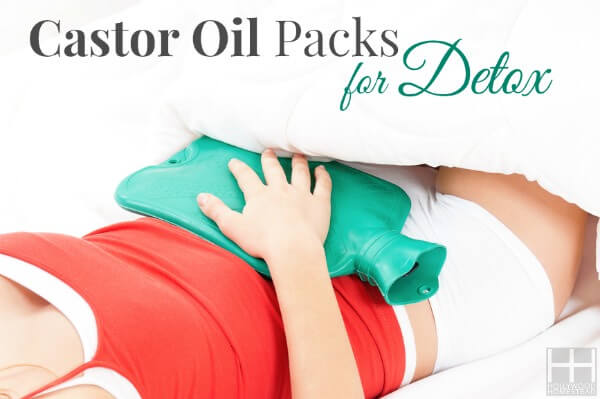 If you are on my email list, then you know that I am currently undergoing a very strict detox protocol for SIBO. To help my body detox even further, I have taking additional steps like doing oil pulling, dry brushing, and taking clay baths. One other thing I have tried is castor oil packs for detox.

What is a Castor Oil Pack?

Castor oil is the oil made from pressed seeds from the Ricinus communis plant. Castor oil is a common anti-constipation remedy and recently has become very popular as a way to clean your skin with the oil cleansing method (note: some find it too astringent for oil cleansing). Castor oil has been used for at least 4000 years and was even found in tombs of Ancient Egyptians.

Castor oil packs were first popularized in the 1900s by a man named Edgar Cayce. The process involves soaking layers of flannel with castor oil, then applying the flannel to your body (for detox, above the liver). You put a sheet of plastic over the flannel and top it off with a hot water bottle. I’m assuming the heat is supposed to help the castor oil get into your skin. You leave the castor oil pack on for about 2 hours.

Some of the purported benefits of castor oil packs are for treating:

There is a lot of research supporting the benefits of castor oil for reducing inflammation and also as an antibacterial. These two properties is what makes castor oil a great natural treatment for skin problems like acne, rashes, and fungal infections. Since it is an oil, it works wonders for drawing oil out of your face (the principle of like dissolves like), which is why some recommend it for oil cleansing. I like this brand of castor oil for oil cleansing.

When it comes to castor oil packs though, there isn’t much evidence showing that putting warmed castor oil on your body will have any benefits. Edgar Cayce claimed that castor oil helped to heal the lymphatic tissue in the small intestines, thus increasing absorption of fatty acids and allowing for tissue growth and repair – but he never gave any proof to back this up other than his own experience. (Source)

If you read through the interwebs about how castor oil packs work, you will find that pretty much all of them which mention “proof” or “scientific study” are referencing a study performed by Harvey Grady in 1999.   You can see the PDF of the study here.

In the study, Grady took 36 human subjects and measured their T-11 cells before and after a 2-hour application of a castor oil pack. His results?

“Initial comparisons of group means showed no significant differences between group responses, due to the use of healthy subjects who blood values were generally within normal ranges. More sensitive analysis was done…where the experimental group (castor oil) showed increases in the number of total lymphocytes and T-11 cells at a significant level of P=0.01, which did not occur in the control group.”

To summarize his results, Grady found that castor oil packs did increase T-11 cells very slightly for 7 hours after the 2-hour treatment, but levels returned to normal 24 hours later.

T-cells come from bone marrow and the thymus gland, and they kill bacteria, viruses, fungi, and cancer cells. So, Grady’s theory is that T-11 cell increase means that the body’s natural immune system is boosted.   He theorizes that the castor oil packs might influence immune system because:

The problem with Grady’s study is that it only had 36 subjects – which is hardly a large sample group. His theories on why castor oil packs increase T-11 cells, while definitely interesting, are not backed up by research or proven in any way.

Note about Castor Oil and Toxicity

A spoonful of castor oil used to be a go-to cure for constipation. Today, the advice is that castor oil is safe topically, but should never be ingested because it is toxic.

What! Why would I want to put something toxic on my skin???

Castor seeds contain a protein called ricin which is very toxic. If ricin gets into your body, it can get into the ribosomes of your cells and prevents protein synthesis, thus killing the cells.   So, you don’t want to eat a handful of castor seeds – and you definitely don’t want to be working in the castor oil factories in India because ricin can be inhaled and harm you. But, according to the International Journal of Toxicology’s Final Report on Castor Oil, you don’t have to worry about ricin in castor oil.

The ricin from the seeds does NOT get into the castor oil. That explains why so many people took castor oil throughout history without experiencing bad effects. It is definitely safe when used topically and the FDA (not that they are the most reliable source on what is safe!) says that castor oil is safe to ingest up to 0.7mg per kg of body weight.

Here is an interesting note about castor oil and toxicity. Because ricin is so effective at killing cells, it is being researched as a cancer cure.  When an antibody is used to deliver it directly to a tumor, it kills cancer cells! (Source)

Should You Try a Castor Oil Pack?

There isn’t much evidence supporting castor oil for detox. Still, I figured it couldn’t hurt so I gave it a try. Honestly, I haven’t noticed any benefits other than what lying down with a hot pack on you would do. But, if you are interested, try it for yourself! At the very least, it will make your skin super soft. You can also use the castor oil for cleaning your skin and removing makeup, so it is worth buying.

Where to Apply the Castor Oil Pack:

Have you tried castor oil packs for detox?  What was your experience? 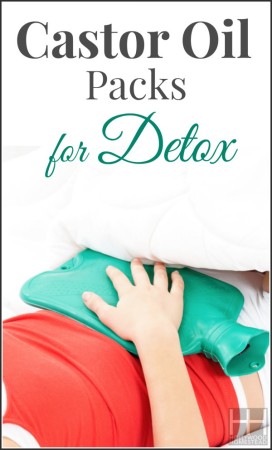