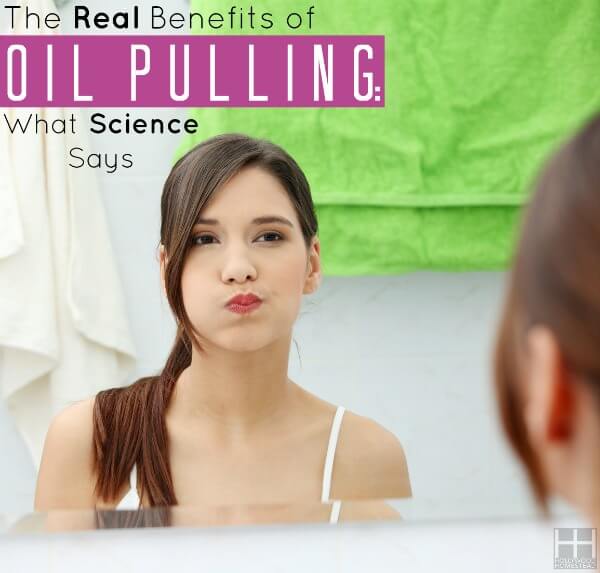 Chances are if you’re into natural and healthy living, you’ve heard of oil pulling…

Oil pulling is an ancient Ayurvedic practice and has gotten a lot of attention lately. It basically involves swishing some unrefined oil around in your mouth for about 20 minutes. The oil helps pull toxins out of the teeth and gums, and also kill pathogens which enter through the mouth.

I am currently going through some detox protocols to help me clear my body. Oil pulling is just one of the ways that I help my body detox and keep my detox pathways clear.  Others include taking clay baths and dry brushing my skin.  I’ve also used oil pulling to help me to cure h. pylori naturally and fight histamine intolerance and get it under control.

While the practice of oil pulling is really simple, the science and claims behind it aren’t so straightforward. Here, let’s look behind the hype of oil pulling and see what it can really do for your health.

I personally use oil pulling and have found it to be a great asset in my dental health. But, before I get into all the scientifically-backed benefits of oil pulling, we should address the hype.

Oil pulling has its roots in Ayruvedic medicine but the modern version of oil pulling is linked back to one Doctor Karach from Ukraine. I haven’t been able to find any information on this Dr. Karach, his medical background, or where he trained. What is known is that, in 1991, he delivered a lecture at an Indian Senior Citizens Association in Houston. A copy of the lecture was sent to the editor of the Journal of World Teletherapy association. The editor then published it in the journal in 1992. You can see the PDF here.

Dr. Karach had some incredible things to say about the benefits of oil pulling. In addition to improving dental health, he claimed that oil pulling cures:

Yes, dental health has now been linked to serious chronic diseases including heart disease, dementia, diabetes, arthritis, and premature birth. This might be why the Ayurvedic text Charaka Samhiti claims that oil pulling can cure about 30 diseases (Source).

The problem is that scientists aren’t exactly sure how dental health is linked to these health problems. According to sources including WebMD and LEF, one theory is that the bacteria from the mouth can escape into the bloodstream and injure major organs.

As much as I’d love to believe this, it seems a tad unrealistic to expect to cure a serious disease in 3 days just by swishing some oil around in your mouth! But this hasn’t stopped a slew of websites from touting these “benefits” of oil pulling.

It’s a bummer when people parrot hyped-up science around the web. In the case of oil pulling, it is particularly annoying because it means that people will dismiss the real benefits of oil pulling. Then, when they don’t cure their heart disease or whatever after a few days of swishing oil, they will then go on to dismiss oil pulling completely. We’d be better off focusing on the scientifically-backed benefits of oil pulling and the REALISTIC RESULTS.

So, YES, oil pulling may help your diabetes, arthritis, migraine or whatever – just don’t expect the miracles that many of these websites are promising.  And don’t even expect your dental health to improve overnight either. Real healing takes time – and it also takes a comprehensive approach which includes real foods and detoxification.

There are two main types of oil which are used in oil pulling: sesame and coconut.  Some people recommend sunflower oil, but this is a processed oil so I wouldn’t use it. Both coconut and sesame oil have scientifically proven antibacterial properties, as well as antifungal and antiviral properties.  There are too many studies to list them all but, in particular, it is worth noting that coconut oil is shown to inhibit Strep Mucans, which is one of the primary bacteria in tooth decay. (Source)

When you swish these oils around in your mouth, you are killing bacteria. Bacteria on your teeth and gums are one of the causes of cavities as the bacteria secretes acids which eat away at your tooth enamel and dentin. Those bacteria build up into plaque and can cause gum disease.

*I say one of the causes of cavities because dental health is about a lot more than just fighting bacteria! If you have enough nutrients in your diet and avoid teeth-eroding foods, then your teeth can regenerate themselves. I talk about this in my book The Gelatin Secret.

Given that bacteria is a cause of poor dental health, it is only logical that swishing oil in your mouth will improve dental health. There hasn’t been much scientific research on oil pulling, but the studies which do exist back this up. Wellness Mama lists many of these studies in her article about the benefits of oil pulling.

As mentioned earlier, poor dental health is linked to chronic health diseases like heart disease, the theory being that the bacteria from your mouth can get into the rest of your body. Based on this, it is logical to assume that killing the bacteria in your mouth will also improve other aspects of your health.

Oil pulling is proven to kill many strains of bacteria which can harm dental health and escape into the rest of your body and cause health problems. But this isn’t the only benefit of oil pulling. The “pulling” part of oil pulling refers to the fact that oils will draw microorganisms to it.

As Dentistry IQ reports, most of the microorganisms in your mouth consist of single cells. These cells are covered with a lipid (fatty) membrane. Under the property of “like attracts like” (which is why oil pulling also works for cleaning skin), the cells will be naturally attracted to the oil and they will adhere together. In this way, oil pulling further helps get rid of pathogens in your mouth.

Which Oil to Use for Oil Pulling?

I say that you should use coconut oil for oil pulling – here is why.

As far as antimicrobial properties go, coconut oil is one of the best for oil pulling. There is a huge amount of research that can be found on the web about the benefits of coconut oil for killing bacteria, viruses, and fungi. Here is just one article to start with. Most significantly, coconut oil is shown to inhibit Strep Mucans, which is one of the primary bacteria in tooth decay. (Source)

By contrast, coconut oil is low in Omega 6 and high in inflammation-fighting Omega 3.  I like to use this brand of organic, unrefined coconut oil for my oil pulling regimen.

How to Do Oil Pulling

Oil pulling is very simple to do.

Best results are seen when you oil pull consistently for at least a couple of weeks but there’s no reason you couldn’t do this every day indefinitely if you want!

Oil pulling alone will not solve all your oral health problems! Good diet is key to oral health, especially making sure you are getting enough fat-soluble vitamins. I am also a big proponent of gelatin-rich bone broth for oral health (amongst other things, like getting rid of wrinkles!). I talk more about how gelatin helps your teeth in my eBook The Gelatin Secret. 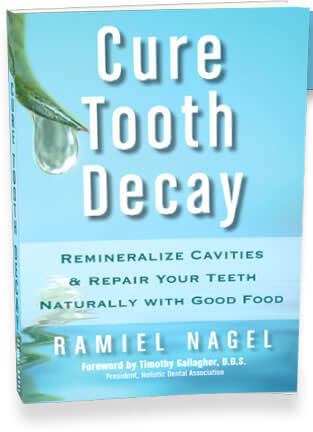 If you want to learn more I highly recommend Ramiel Nagel’s book, Cure Tooth Decay.  This book will change the way you think about dental care!  You can buy it here on Amazon.

Have you tried oil pulling?  What’s your experience?  I’d love to hear from you in the comments! 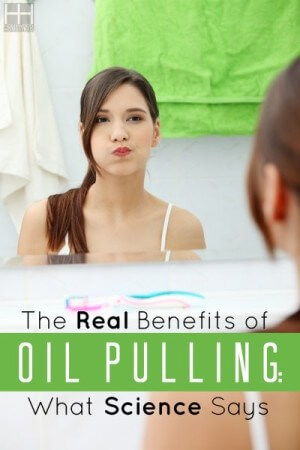 25 thoughts on “The Real Benefits of Oil Pulling: What Science Says”