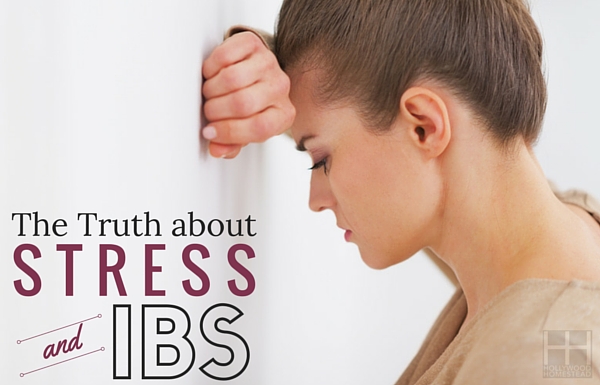 If you have Irritable Bowel Syndrome (IBS), then your doctors have probably told you to “reduce stress.”  In fact, this may be the only advice you get.  This is really frustrating because we now know that IBS is NOT caused by stress, but is rather a problem with the gut-brain axis. However, stress definitely does play an important role in the development of IBS and must be addressed.  Here is what you really need to know about IBS and stress.

You have about 100 trillion organisms living in your gut.  To put this in perspective, this is 10x the number of cells in your entire body!  Only recently have researchers begun to realize the very important role these organisms (known as our gut flora) play in our health.  Problems with gut flora are linked to all sorts of diseases ranging from obesity to arthritis. One of the possible causes of IBS is unbalanced gut flora. Here, I won’t talk about how unbalanced gut flora causes IBS, but rather how stress can alter our gut flora.   Read about the importance of gut flora here.

If you take a group of healthy people and analyze their guts, they will each have greatly different bacterial compositions. So you can’t really compare two different people’s gut bacteria and say that one is better than the other. However, you can look at how an individual’s gut bacteria changes.

Researchers have found that the gut bacteria composition of a healthy person pretty much stays the same. Even when the composition is measured months or more apart, it is still the same. However, when you put that person in a stressful situation, the bacterial composition greatly changes. This can create an imbalance which causes health issues. (Source)

One study performed by researchers at Ohio State University looked at how gut bacteria changes under stress. It found that the bacteria becomes less varied and that there are greater numbers of potentially harmful bacteria.

In this study with mice, researchers caused stress in the mice by changing their cages to one with a metal wire floor. The stressed mice had elevated levels of a certain bacteria called alistipes, which is known to cause stomach pains in people.

I want to reiterate that IBS isn’t in your head! Remember that the gut-brain axis is a two-way street.   Stress can cause changes to your gut flora, but disturbances to your gut bacteria can also cause stress. In this sense, stress is symptom of IBS as much as it is an underlying cause.

Several studies have found that IBS and acid reflux (GERD) often occur together.   For example, a 2010 study found that 63% of those diagnosed with IBS also had GERD symptoms. (Source)

Based on all those heartburn medicine ads you see on TV, you would think that acid reflux is caused by having too much gastric acid and that antacids are the solution to all your problems. Really, heartburn is caused by too little acid.   (Source)

The symptoms of acid reflux do not occur from having too much acid, but rather occur when acid gets into the esophagus. This can happen when there is too much pressure (such as from inflammation and excess stomach gas) and the pressure causes stomach acids to be pushed up into the esophagus.  Antacids do wonders for suppressing the symptoms of acid reflux but, because you need acid, they don’t address the underlying problem and actually make the problem worse in the long run. (Source)

Our bodies need gastric acid to digest food and break it down.   Without enough stomach acid, you end up with undigested carbohydrates in your digestive tract. Bacteria in your small intestines love most carbohydrates and they start to feed off of them. The bacteria in your gut start to proliferate, which can lead to a disruption in the gut flora and cause IBS symptoms or SIBO (which may be the real cause of your IBS).

As researchers Suarez and Levitt talk about here, just 1 ounce of carbohydrates that escapes absorption in a day could produce more than ten quarts of hydrogen gas in small intestine. This gives you an idea of how much pressure undigested carbs can produce! 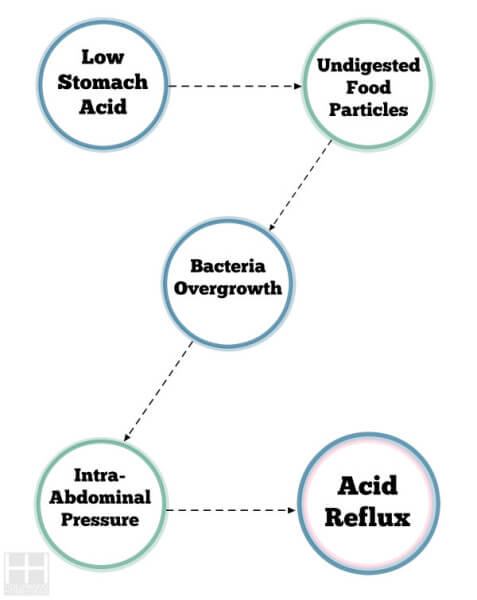 Why Would You Have Low Stomach Acid?

The obvious answer to this question is that you have been prescribed proton pump inhibitors or are taking antacids for acid reflux.   But what caused you to have the acid reflux symptoms in the first place?

Though the drug industry would rather you didn’t know about it, research shows that ulcers are caused by a bacteria called h. pylori which is present in as many as 2/3 of the population. I personally dealt with this.  You can read about how to treat h. pylori here.

There are many other reasons why your stomach acid production might be low. One of the big ones is stress. The more stressed you are, the less gastric acid you will produce and the harder it will be for your body to regulate bacteria levels in the gut.

If you have ve IBS, then this is one of the most important things you need to know: upwards of 84% of people with IBS will test positive for SIBO. There is a very strong link between stress and SIBO, and it could be that stress in the underlying cause of IBS. It isn’t that the stress itself causes SIBO, but it can lead to the conditions which support SIBO.

Whether it is IBS or SIBO which is to blame, you can end up in a vicious cycle of stress. Your symptoms cause you a lot of stress in your life (worrying about whether you will get diarrhea during the middle of an important meeting is definitely stressful!). This stress further impairs your gut bacteria, which leads to worse symptoms and further stress. You must break through this cycle by taking steps to restore your gut flora while simultaneously reducing stress. 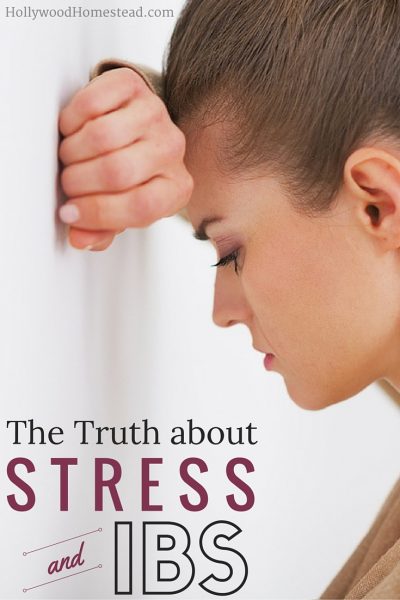 5 thoughts on “The Truth about Stress and IBS”