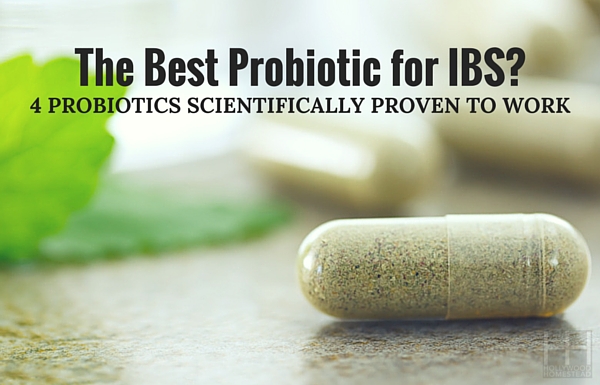 Probiotics are one of the biggest fads in health right now. You can’t walk down the yogurt aisles of your supermarket without seeing dozens of brands of yogurt advertising that they contain probiotics. You’ll also find no shortage of probiotic powders, gums, lozenges, capsules, and even probiotic tampons. The fad is so big that global sales of probiotics are estimated to be $42 billion. (1)

Probiotics have been shown to be helpful in treating IBS. But before you jump on the probiotics bandwagon and start taking probiotic supplements for your IBS, be warned that there is still a lot of research which needs to be done. You also need to know that there are different strains of probiotics and some may or might not work for your IBS. Finally, there are still a lot of regulatory issues with probiotics so you must make sure you are getting a quality product.

What is a Probiotic?

The World Health Organization defines probiotics as “live microorganisms, which, when administered in adequate amounts, confer a health benefit on the host.” We normally think of probiotic organisms living in the gut, but they are also found in other parts of the body such as the our skin, vagina, and mouth.

Researchers still aren’t sure how exactly probiotics work, but some possible mechanisms of action are:

What about Prebiotics for IBS?

Prebiotics are basically food for probiotics. Many probiotic supplements will also contain a prebiotic in order to help the probiotic grow and colonize the gut. Humans can’t digest prebiotics. Some examples of prebiotics are oligosaccharides and inulin. These can be found in foods like onions, leeks, and asparagus.

Should you be taking prebiotics along with your probiotic for IBS? The problem is that bad bacteria can also eat prebiotics. If your IBS is caused by an overgrowth of bad bacteria (aka SIBO), the last thing you want to do is feed the excess bacteria.(3)

Many prebiotics – including oligosaccharides and inulin – are also FODMAPs and will cause intestinal fermentation and thus cause symptoms. While treating IBS with diet, it is recommended that you do NOT take prebiotics.(4) Without the prebiotics, the probiotics might not be able to repopulate your gut so you will have to take the probiotics every day until your gut bacteria is reset.

What is the Best Probiotic for IBS?

There have only been a limited number of tests on probiotics for IBS, and these tests were often very small and biased. So, if want to use probiotics for your IBS, you will basically be turning yourself into a guinea pig.   The International Foundation for Functional Gastrointestinal Disorders (IFFGD) recommends that you keep track of your symptoms while taking a probiotic to see if it is right for you. They also warn that you shouldn’t expect any immediate benefits. It can take weeks for the probiotics to start showing benefits. If your symptoms get worse on a probiotic, you should stop taking it right away.

Below I will list some strains of probiotics which have shown promise in clinical studies for IBS. Again, this doesn’t mean that the probiotics are going to work for your IBS. Gut flora is very complex and each of our gut flora is different. Simply adding one bacteria to it won’t miraculously reset your gut flora – but probiotics can help a lot, so they are worth trying.

*Note that bacteria are listed by Genus, Species, and Strain. For example, for the probiotic bacterium, Lactobacillus rhamnosus GG, the genus is Lactobacillus, the species is rhamnosus and the strain is GG. Just because a study found one strain of bacteria to be beneficial for IBS, it doesn’t mean that another strain in the same species will also be beneficial.(5)

This is actually a type of yeast and not bacteria. It is the only yeast which is considered beneficial enough to be considered a probiotic. It has shown helpful in treating IBS-D. It fights off pathogenic strains of bacteria and reduces inflammation. Note that S. boulardii does not colonize the gut so it will need to be taken continuously and it is recommended to take it with a bacteria which will colonize the gut. My favorite brand of Saccharomyces boulardii. (6)

This probiotic produces enzymes which help digest starches and lactose. It has been shown effective in reducing bloating. (7)

This strain has been tested multiple times and promising results were found. It is shown to relieve multiple symptoms of IBS including pain, bloating, and bowel movement difficulty. Results suggest that it works by having an immune-modulating role. (9, 10)

While taking a single strain of probiotics may help, remember that your gut flora is very complex. You probably aren’t going to be able to reset it by taking just one probiotic. Studies support this idea, as studies which use combinations of multiple probiotics have significant effects in improving IBS symptoms. (11,12)

How Long to Take Probiotics for IBS?

The goal with probiotics therapy for IBS is to introduce healthy bacteria into your gut so it can repopulate the gut and fix any dysbiosis. You will need to take probiotics for a while in order to give them time to take hold and grow. Dr. Hyman recommends taking probiotics 2x per day for 1-2 months.  The National Institute for Health and Care Excellence (NICE) suggests taking them for at least four weeks. (13,14)

Ideally you are taking probiotics at the same time you are going the Low FODMAPs diet or Elemental diet. After the diet period is up, you’ll want to keep on taking the probiotics. Slowly start adding FODMAPs back to your diet and see if you experience symptoms. If you do, then you will have to stick with the therapy for longer.

Quality of Probiotics for IBS

Probiotics are living organisms and, live all living things, they can die. As Dr. David Williams says, a probiotic supplement full of dead bacteria is a waste of money. (15)

Unfortunately, there are virtually no regulations to control the quality of probiotic supplements. Probiotics are regulated as food under by the FDA, which is the lowest possible regulation standard. There is no requirement for manufacturers to test their product and prove that the probiotics are still alive.

When buying probiotics, choose ones which have expiration dates. Probiotics should also be refrigerated to help them stay alive. Avoid buying probiotics from major retailers as they often aren’t going to be handled ideally. You will also want to look for ones which are formulated in a way so they can actually make it to the gut without being destroyed by stomach acid, such as in a controlled-release tablet or capsule.

If you aren’t sure whether your probiotic is actually still active, you can perform this at-home test:

A study done in British Columbia and reported in 2004 looked at ten different over-the-counter products labelled as containing the probiotic bacteria, Lactobacillus. Analysis showed that only five brands contained live Lactobacillus, while two of them grew no organisms whatsoever. Five brands contained other species of bacteria, not listed on the label. Of the brands that actually contained Lactobacillus, the amount that could be cultured from the product ranged from 0.8% to 1.3% of the amount stated on the product label. With the developing Health Canada guidelines for selling probiotics, this might not be an issue in the near future. (16)

Have you tried probiotics for IBS?  Did they help?  I’d love to hear from you in the comments. 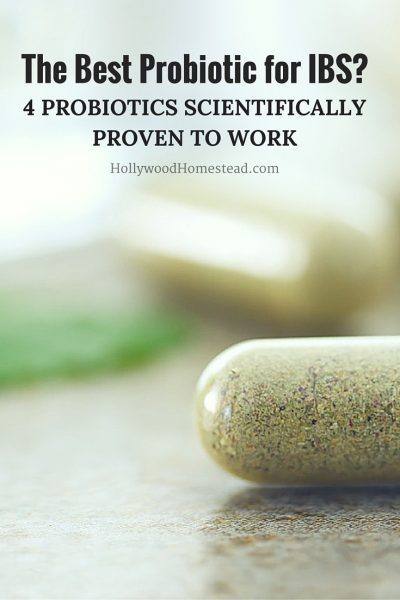 8 thoughts on “The Best Probiotic for IBS? 4 Probiotics Scientifically Proven to Work”